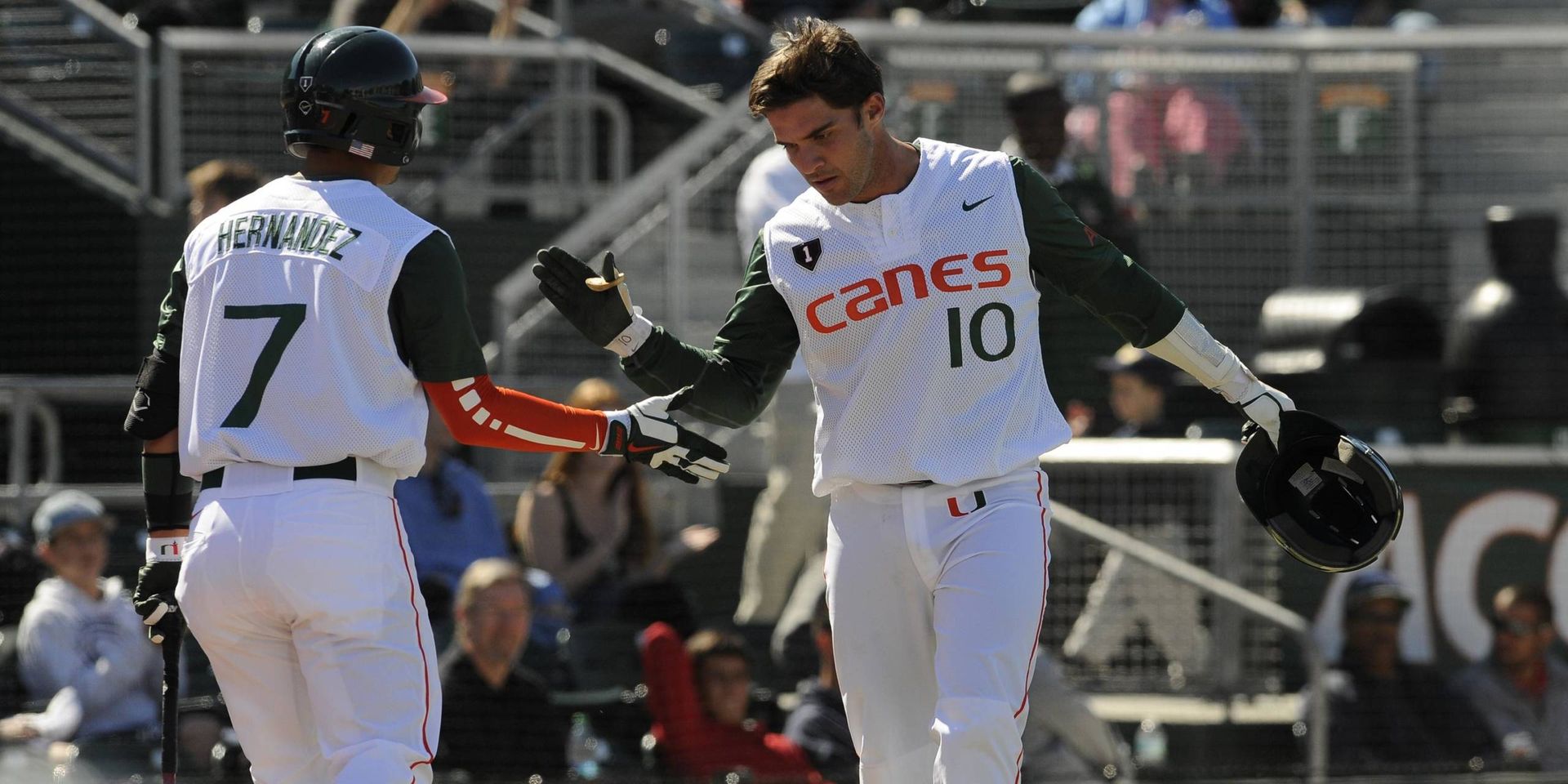 “I thought we played the game pretty well,” head coach Jim Morris said. “We played solid defense, we got good pitching, and we got a lot of hits. It was a good combination for us.”

“I think it’s a work in progress,” Salas said. “I’ve been working hard during the week and my bullpens so that when I go out there I’m pitch, I’m not thinking about anything.”

Though the game remained close in the middle innings, Miami blew it open with three runs in the eighth. RBI singles from Alex San Juan and Garrett Kennedy, along with the second double of the night from junior Alex Hernandez, saw the hosts take a late five-run lead heading into the ninth.

Miami (25-15) had at least two runners on base in each of the game’s first four innings, but came up empty in its first two chances. A gaffe from Hernandez on the basepaths resulted in an inning-ending double play in the first, while Wildcats’ starter Ali Simpson (3-6) worked his way out of a big jam in the second with two strikeouts and a groundout.

The Hurricanes finally broke through in the third inning, as an RBI double from San Juan into the left-center gap opened the scoring in Miami’s favor. With Hernandez (walk) on second and senior Chantz Mack (hit by pitch) on first, San Juan roped his fifth double of the season to guide Miami to a 1-0 advantage.

Though the Wildcats (23-19) responded with an RBI single from Matt Noble to tie the game at one, the Hurricanes plated two more runs in the bottom of the fourth to gain a 3-1 advantage.

Eight straight balls from Simpson to open the inning resulted in back-to-back walks to junior Brad Fieger and freshman Brandon Lopez, both of whom advanced via Dale Carey’s sacrifice bunt. With freshman Michael Austin on the hill in relief of Simpson, junior Tyler Palmer flew out to deep right to plate Fieger, helping Miami regain a 2-1 lead.

Austin then plunked Hernandez with a pitch and allowed an infield single to Mack to load the bases for freshman David Thompson. The Miami, Fla., native, who entered Wednesday’s contest with a team-leading 27 RBI’s, drew a bases-loaded walk from Austin to make it 3-1. A groundout from San Juan, who recorded his first career four-hit game in the win, would prevent any further damage.

“I was seeing the ball well,” San Juan said. “I just tried to get into good counts to hit, and jump into hitter’s counts whenever I had the chance.”

The Hurricanes were unable to strike for much more off Austin after the fourth, as the righthander held Miami scoreless over the next three frames.

Salas, sharp once again for head coach Jim Morris and staff, was able to match Austin by keeping the Wildcats off the board for his final three innings of work. After the team’s offense tacked on three runs in the eighth, senior Eric Whaley and junior AJ Salcines pitched well in relief, closing out the 6-1 victory.

The Hurricanes will return to Alex Rodriguez Park at Mark Light Field for an Atlantic Coast Conference series with No. 20 Clemson beginning Friday, April 19. First pitch for the series opener, is set for 7 p.m.