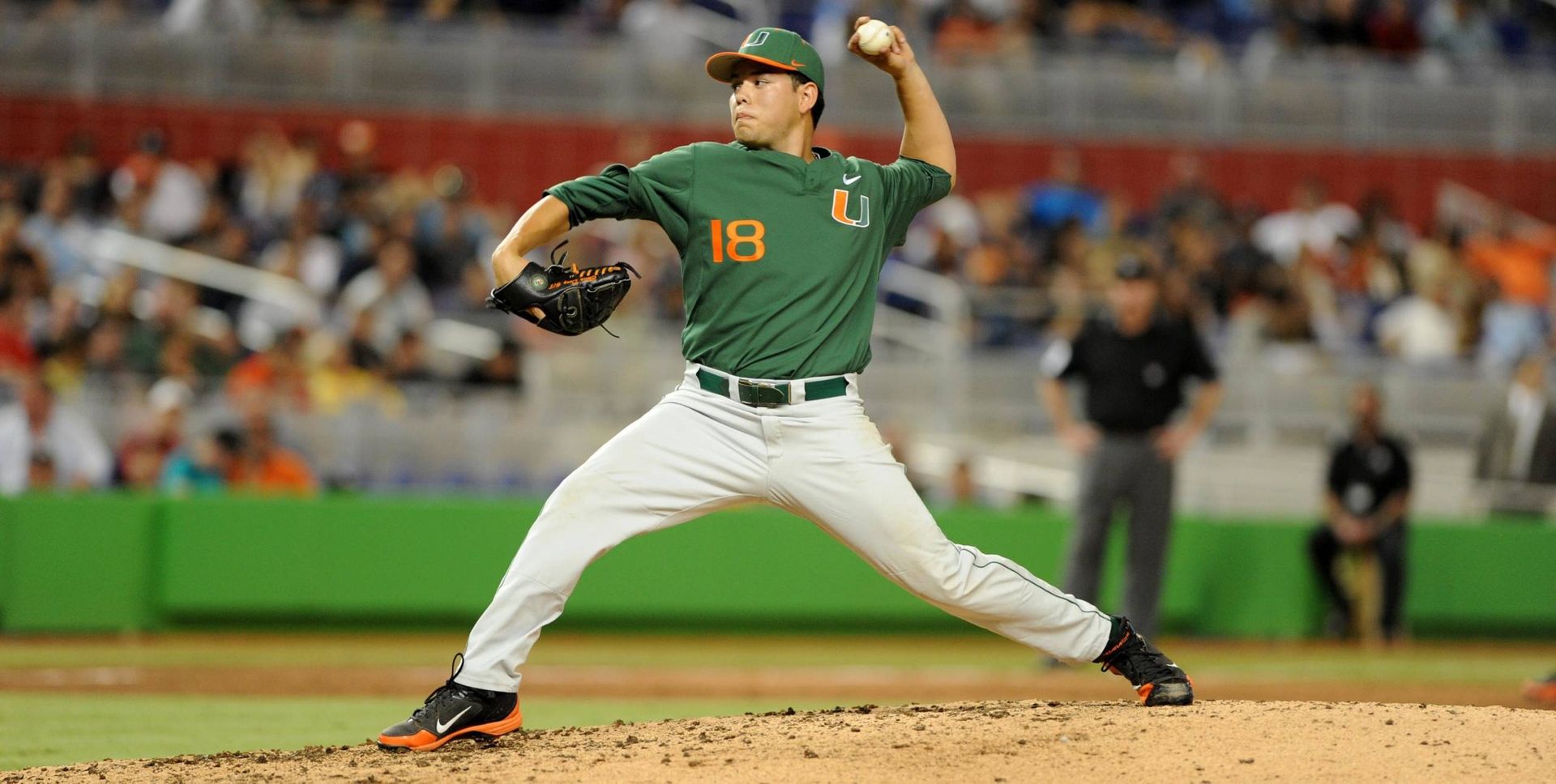 COLLEGE PARK, Md. – In an extra-inning pitcher’s duel Friday night at Shipley Field, the Miami Hurricanes captured their series opener with homestanding Maryland by a final score of 1-0.

A clutch two-out RBI single from freshman Brandon Lopez in the top of the 13th broke a 0-0 deadlock, scoring fellow freshman David Thompson from second.

Thompson delivered a double earlier in the frame, Miami’s first hit since the middle innings. After Dale Carey walked on four pitches, Lopez delivered his third career gamewinning hit on a single to rightfield.

Sophomore lefthander Chris Diaz combined with three relievers to keep the Terrapins off the scoreboard for 13 impressive innings, as senior Eric Nedeljkovic recorded his seventh save of the season in the win.

Diaz was sharp once again for the Hurricanes, facing the minimum of 14 batters through his first 4.2 innings of work. The Florida City, Fla., native worked his way out of every jam, striking out six batters on the night and matching his career high with eight shutout frames.

Diaz did not allow a hit until a fifth-inning double from Anthony Papio, which set up the game’s first true scoring opportunity for either team. But with Papio on second and Jack Cleary (hit by pitch) on third, Diaz induced a groundball from Blake Schmit fielded well by freshman shortstop Brandon Lopez to work himself out of the jam.

Freshman David Thompson broke up Maryland starter Jimmy Reed’s no-hit bid in the top half of the fifth, lacing the first pitch he saw into centerfield for a single. Dale Carey’s groundout to the pitcher advanced Thompson to second, while Reed issued an intentional walk to sophomore Garrett Kennedy for a potential forceout at any base. With two outs, Lopez ripped a Reed offering right at first baseman LaMonte Wade, who caught the line drive to end the inning.

The Hurricanes (23-12, 7-9 ACC) nearly opened the game’s scoring an inning later, as senior Chantz Mack connected on a two-out single. After Mack took second on a wild pitch from Reed, a single from senior Alex San Juan into rightfield forced a close play at the plate. But Mack was gunned down at the plate on a nice throw from Terps’ outfielder Jordan Hagel, ending the scoring opportunity for the Hurricanes.

The Terrapins (18-16, 4-12 ACC) countered with an eighth-inning, two-out rally against Diaz. The hosts managed to load the bases on two singles and a walk, but Diaz induced a groundout of Kevin Martir up the first base line to get out of a tough jam. On an underhanded lob from freshman first baseman Christopher Barr, Diaz ended his night with a tag of Martir near the bag.

Senior Eric Whaley was dominant in relief, tossing three scoreless innings after relieving Diaz in the ninth. AJ Salcines (3-3) pitched a scoreless 12th, while Nedeljkovic recorded his seventh save of the season by closing out the victory.

The Hurricanes will return to Shipley Field for game two of their weekend set with Maryland on Saturday. First pitch is set for 6:30 p.m.