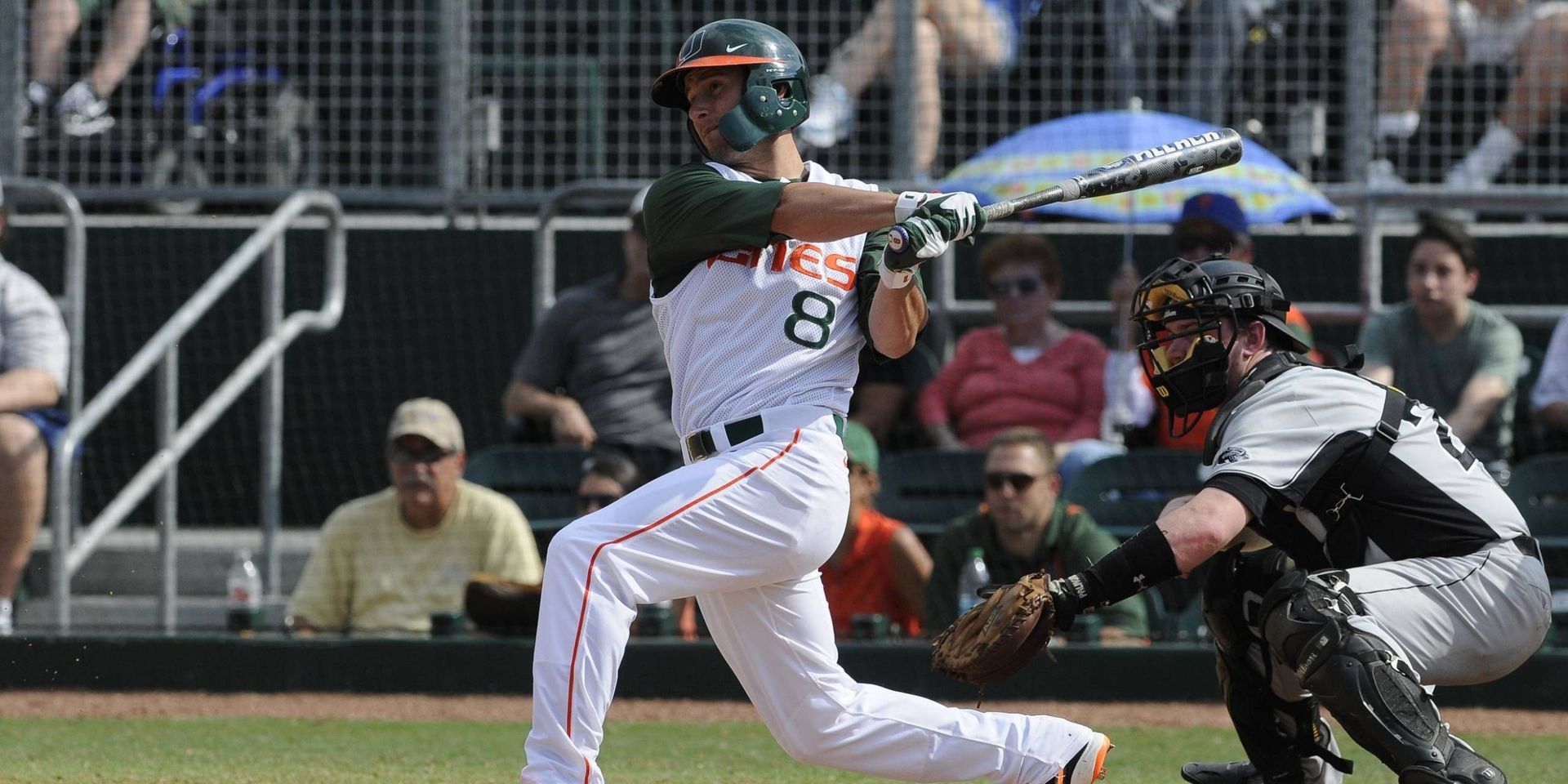 After falling behind twice in the game’s later innings, the Hurricanes (17-7) responded both times and then scored two runs in the bottom of the eighth for their first lead since the early innings. Senior Eric Nedeljkovic shut down the Lions in the top of the ninth, closing out his fourth save of the season.

With the game’s start time pushed back due to inclement weather, the first pitch from Miami junior righthander Javi Salas arrived at 8 p.m., two full hours after the contest was originally slated to begin.

For the second consecutive night, the Hurricanes jumped out to an early lead. After junior Tyler Palmer reached base in the bottom of the second via full-count walk, senior Michael Broad laced a double off starter Joey Gandolfo over the head of Lions’ leftfielder Eric Williams. Running on the pitch, Palmer raced around to score all the way from first, giving the hosts a 1-0 advantage.

Salas, making the first midweek start of his season on his 21st birthday, delivered an efficient outing but received no decision in the win. The Coral Gables, Fla., native went 5.2 innings, allowing two runs on four hits while striking out three Lions’ batters.

Salas got an early boost from his defense, as junior centerfielder Dale Carey provided Miami with a tremendous catch in the third inning. After Lions’ leadoff hitter Jordan Serena connected on what looked like a surefire hit into the left-center gap, Carey sprinted to his right, diving full extension to rob Serena. It wouldn’t be the last time Carey would make the highlight reel.

The Lions got on the board in the fourth, but Salas did well to limit the damage in the inning. After the first two batters reached on back-to-back singles, Salas retired Nick Ferrarersi on a fielder’s choice and got Aaron Silbar on a groundout to shortstop Alex Hernandez. The ball was deep enough in the infield to force Hernandez to take the out at first, however, as the Lions knotted the game up at 1-1 on the RBI groundout.

After recording the first two outs of the sixth, Salas would run into some trouble. The righthander hit Ferraresi and issued a walk to Silbar before allowing an RBI single to David Vandercook. Freshman Frank Grandinette entered for Salas in relief, inducing a quick groundout of Nick Crucet to exit the inning with his team facing only a 2-1 deficit.

Miami would respond with a run of its own in the bottom of the frame, as a bases-loaded walk drawn by junior Alex Hernandez, his second in as many nights, tied the game at 2-2. The Hurricanes fell behind once again just an inning later, but not before Carey made another outstanding grab in centerfield to help prevent extra bases. The junior outfielder, sprinting deep into the gap in right-center, robbed Williams of extra bases on the play.

An RBI groundout from pinch-hitter Garrett Kennedy and an RBI single from Broad knotted the game up at 4-4 heading into the eighth inning. After Thomas Woodrey (3-0)  pitched a quick top half of the eighth, the Hurricanes struck for two in the decisive bottom of the frame on a Brandon Lopez grounder and a sacrifice fly from Ricky Eusebio.

The Hurricanes will return to Alex Rodriguez Park at Mark Light Field for a three-game series with Virginia Tech beginning Friday, March 22. First pitch for game one is set for 7 p.m.