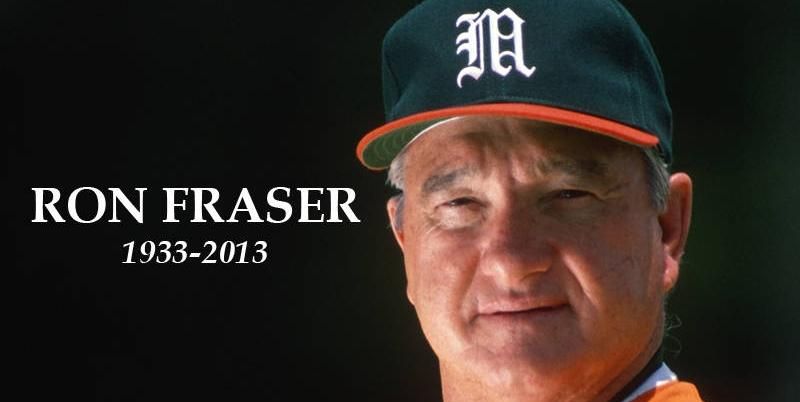 CORAL GABLES, Fla. – Ron Fraser, nicknamed the “Wizard of College Baseball”, who guided the Miami Hurricanes baseball program for 30 seasons, died Sunday at the age of 79.

Fraser, who led the Hurricanes to the 1982 and 1985 College World Series titles, coached Miami from 1963-92, amassing a 1,271-438-9 record and ended his career as the third-winningest coach in NCAA history. He was the NCAA Coach of the Year four times while at the helm at ‘The U’.

“Coach Fraser was like a father to me,” University of Miami head baseball coach Jim Morris said. “He was the most influential man in my career and a great friend who I knew I could always rely on. He played such a significant role in the history of college baseball and of this program and we will always be a tribute to him.”

During the early 1970s, Fraser developed a friendship with George Light, which forever changed the face of college baseball. Mark Light Stadium was built and was considered the best college stadium in the country, starting a trend in college baseball facilities that would change the game forever.

“Coach Fraser had a tremendous impact on the baseball program at the University of Miami at a pivotal time in our history,” UM President Donna E. Shalala said. “His love of the sport and the program can still be felt, years after this legendary tenure at ‘The U’.”

Fraser’s mastery of marketing the game helped develop the sport into a major player in college athletics. From ESPN covering games in Miami to his “Dinner on the Diamond”, from creating the batgirls with “The Sugarcanes” to developing a mascot, The Miami Maniac, Fraser made Mark Light Stadium the premier family entertainment spot in South Florida.

“Our thoughts and prayers go out to the family and friends of Coach Fraser,” UM Interim AD Blake James said. “The impact he had on our University, on college baseball and on the game itself worldwide is immeasurable. His legacy will live on through the lives of those whom he touched and through the innovations he incorporated into America’s pastime.”

Fraser led Miami to 20 consecutive NCAA Regional berths and 12 College World Series appearances. More than 100 of his former players went on to play professionally in Major League Baseball. In 1990, he was named “Coach of the Decade” for the 1980s by Collegiate Baseball. Fraser also enjoyed international success in leading the U.S. National Team to a Silver Medal at the 1987 Pan American Games. He also served as head coach of the first U.S. Olympic baseball team in 1992.

Ronald “Ron” George Fraser came to the University of Miami in 1962 after serving as the coach of the Dutch National Team for three years, winning three European Champions. His international reputation earned him the job at Miami, succeeding Whitney Campbell. Ironically, Fraser came on the radar of UM officials through the television show, “What’s My Line?”, as Fraser routinely stumped the panel.

A three-year letterwinner at Florida State from 1954-56, Fraser’s uniform No. 1 was officially retired on April 24, 1993, at Mark Light Field. He was a 26-time Coach of the Year and a member of 10 Halls of Fame, including the inaugural class of the College Baseball Foundation Hall of Fame in 2006.

RON FRASER WIZARD FUND
In recognition of his lifetime accomplishments and a distinguished legacy of helping others, the University of Miami has created the Ron Fraser Wizard Fund to honor the Hall of Fame coach with a bronze statue to be placed at Alex Rodriguez Park.

Friends and fans of the man nicknamed can make contributions to the Ron Fraser Wizard Fund by clicking here. All contributions are tax-deductible. For more information, contact Rick Remmert, UM’s Director of Alumni Programs, at 305-284-9517, or by e-mail at r.remmert@miami.edu.

REMEMBERING A LEGEND
“The South Florida community, the University of Miami and the college baseball world has lost one of its best assets. There will only be one ‘wizard’ of college baseball, and he will always be remembered as a great innovator, motivator, and one of the greatest coaches in the history of baseball.”
Jay Rokeach, entering his 45th year as public address announcer for Miami Hurricanes’ baseball after being hired by Ron Fraser in 1969.

“Not only for Miami baseball, but for all of college baseball, he was the guy. He is the ‘wizard.’ He was the person who put college baseball on the map – not only in the crowds and the entertainment we see today, but tin he competitiveness of the game itself. It was all him. He was a great person with alumni, students and fans of the university. There is no coach, college, high school or otherwise, as well-known as Coach Fraser. Everyone respected him. We were very fortunate to have been associated with him for over 30 years, and to have his name at our university. I am so proud to have known him.”
Paul DiMare, University of Miami Board of Trustees

“Ron Fraser was a pioneer, paving the way not only for college baseball nationally, but also for Major League Baseball in South Florida. The ‘Wizard’ had a unique way of inspiring people to believe they were going to win; because of Coach Fraser there will always be magic in Coral Gables.”
Joe Zagacki, Voice of the Miami Hurricanes