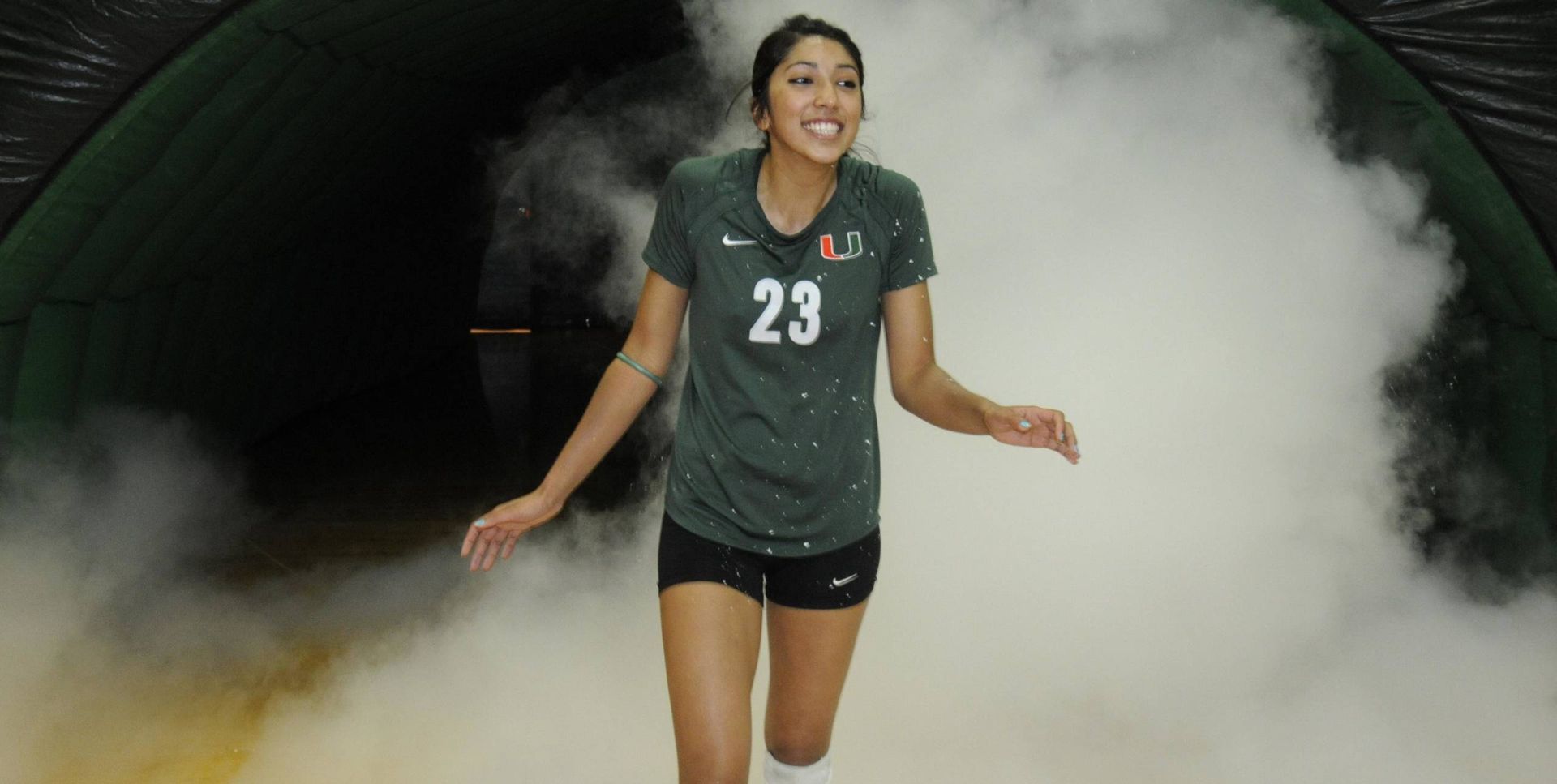 No. 24 Volleyball Finishes Perfect at Home

Priorto the match, the program honored the contributions of senior setter NrithyaSundararaman, who ranks third all-time in school history with 2,257 careerassists. She picked up 35 on the day to orchestrate the offensive performance.

“Nrithyadid a nice job of getting the ball to our hitters,” head coach Nicole LantagneWelch said. “It is great to have the team functioning so well on this day.Overall, I thought we were able to serve tough and handle our passing prettywell throughout the match. Nrithya put us in some good situations with hersets, which allowed us to be effective on offense. Also, we were able to pickup our defensive efforts as the match went on.”

Defensively,junior libero Ryan Shaffer had a match-high 21 digs to help hold the Terps to a.144 hitting percentage. She leads the team with 506 digs (4.77/set) on theseason.

Thevictory was the 17th straight win at home and the 29th inthe last 30. The only other season UM had a perfect home regular season was in1980 (5-0). This year, the Hurricanes won 39 sets at home while dropping onlyseven.

“Itis really hard to go undefeated at home and stay sharp every time out,”Lantagne Welch said. “That is always one of goals and to sustain thatthroughout a season is special.”

TheCanes came out strong with a 6-2 run to start the match, forcing a Marylandtimeout after a combined block by Sundararaman and Mourning. From there, theTerps could get no closer than four, with the lead growing to as many as seven.A visitor ball handling error closed the opener in favor of the Canes.

Thesecond set was tighter towards the end after Maryland won four straight pointsto make it 18-16. That would be the closest they would get, as Miami won the nexttwo exchanges to reach 20. A 5-3 spurt from the hosts sent the Canes intointermission with a commanding 2-0 lead.

Withthe momentum in hand, the Hurricanes started the third up 11-2 to take completecontrol. The advantage went up to as much as 10, with freshmen Misty Ma’a, ErynCroft and Kelsie Groot helping seal the set and match. It was the 13thstraight set won at home.

TheCanes collected seven aces in the match to go with nine total blocks to beatMaryland (16-15, 7-12) for the 10th consecutive time. The Canes alsodefeated the Terps in three sets on Oct. 12 at Comcast Pavilion.

Thewin now sets up a championship match Friday at Florida State, with the winnertaking the ACC title. The contest will be start at 1 p.m. and will be broadcaston ESPN3. Miami defeated the Seminoles in four sets on Sept. 7 at home.

“Itis going to be fun – Florida State is a great team and we know that,” LantagneWelch said. “We had a great match with them earlier in the year and we aregoing to expect their best on Friday. In order to win, we will have to play atour very best. It is setting up for a great situation; everyone in our programis looking forward to it.”