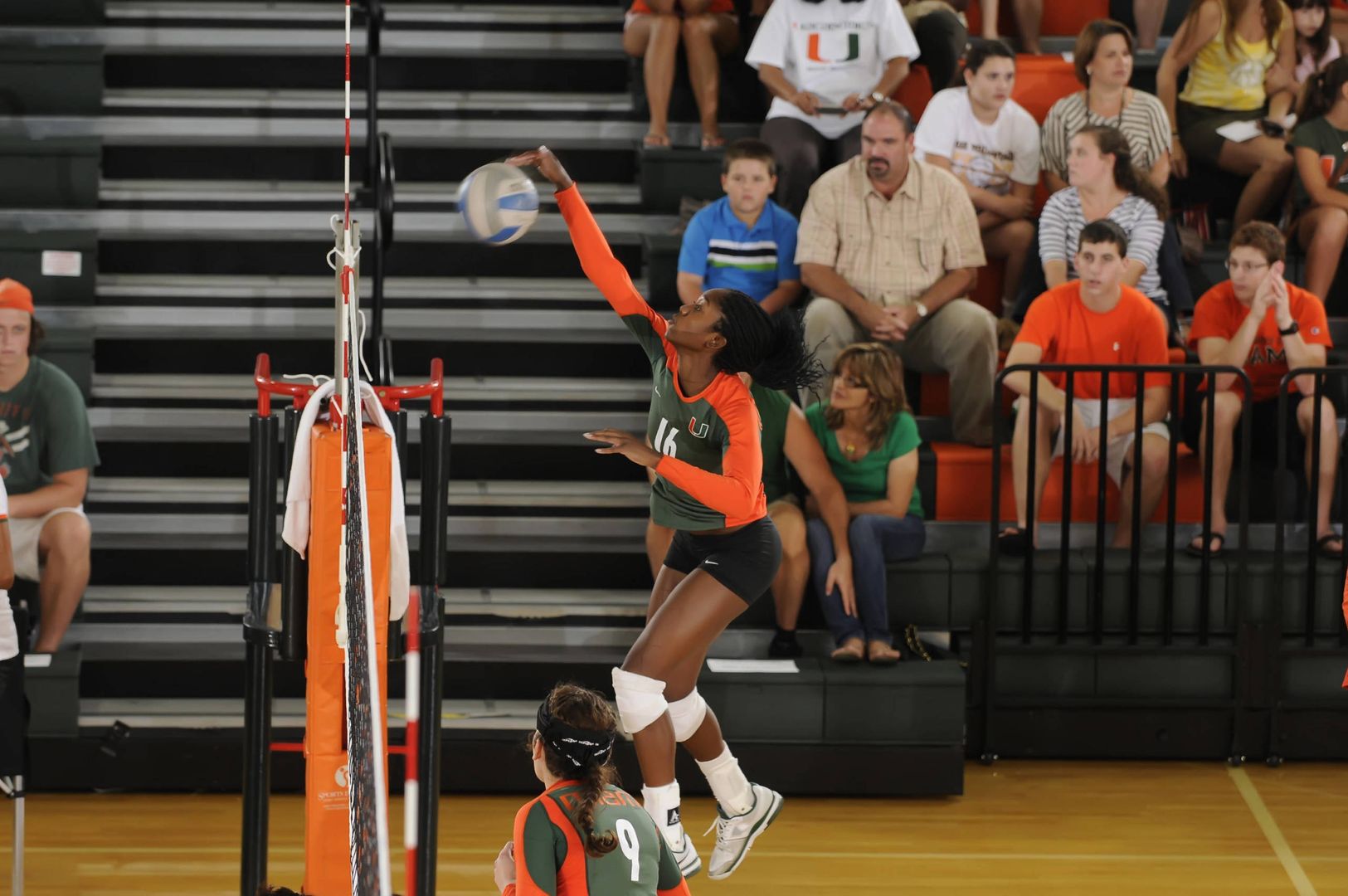 Sims Blocks No. 24 Volleyball Past Clemson

CLEMSON, S.C. – Behind one of the mostimpressive performances in program history by sophomore middle blocker EmaniSims, No. 24 Miami volleyball held off upset-minded Clemson in five sets onFriday inside Jervey Gym. Sims recorded her first career double-double with 16kills and a school-record 16 total blocks.

“Weknew it was going to be a great test and we knew that Clemson is a great team,”head coach Nicole Lantagne Welch said. “We were able to stay together and puttogether a great team effort.”

TheHurricanes, who entered the weekend ranked first in the ACC in blocks, tallieda program-record 23.0 total team blocks against the Tigers. The previous bestwas 21.0 set against Florida State in 2005.

“Emaniwas just incredible at the net tonight,” Lantagne Welch said. “They have somefantastic hitters on the other side and it was impressive how she was able toshut them down. It was a big statement because they are such a great blockingteam and we were able to out-block them.”

Seniorsetter Nrithya Sundararaman totaled a season-high 55 assists for the UM.

Miamitook the first set behind five kills and nine digs from Hollins, with Leaf alsoadding five kills of her own. After the teams split the first 22 points, theCanes took three of the next four points to go up 15-12 and never lost theadvantage from there. The lead grew to as much as 19-14 to force the Tigers totake a timeout. Following, UM held off the hosts with Leaf slamming a kill toend it and give Miami the 1-0 lead.

However,Clemson responded in the second set with a late run to even the match at oneheading into intermission.

Inthe third, Miami jumped out to a 15-8 lead to pull the momentum back and forcea Clemson timeout. The Tigers could only get to as close as four points, as akill by Johnson off a free ball put UM up 2-1.

Itlooked as though the Canes would take the fourth set after reaching 20 first at20-18, but Clemson rallied to win seven of the next 10 points to send UM to itsthird five-set match of the season. It was the second-straight time Miami hadgone the distance, defeating Boston College on Oct. 14.

Inthe deciding fifth set, the teams went back and forth to bring the count to sixapiece. From there, the Hurricanes won the next three points on a kill andblock by sophomore middle blocker Alexis Mourning and a bad CU set. AfterLantagne Welch took a timeout with a lead of 9-8, UM sealed the win with a 6-3run. Leaf put down a kill to give the Canes their first win at Jervey Gym since2010.

NOTES
TheCanes are now 11-5 when playing as a ranked team … Miami started 23-3 lastseason … it was the team-leading 14th double-double of the seasonfor Hollins … five starters reached double-digit kills … Sundararaman needs 59assists to reach 2,000 for her career … UM has won its last three on the road andis 16-0 when holding a high hitting percentage than the opponent.