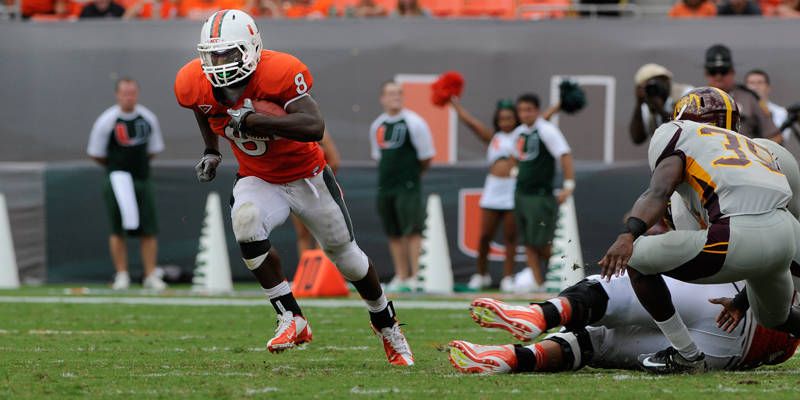 MIAMI (AP) – One of the biggest reasons why Duke Johnson decided to enroll at Miami was that staying in his hometown for college would enable his friends and family to still see him play.

And on Saturday, he gave them a show.

The freshman scored four touchdowns – getting them three different ways – and finished with 246 all-purpose yards in his first collegiate home game, leading Miami past Bethune-Cookman 38-10.

“I’m just waiting for him to do a backflip sometime in the middle of a play,” Miami quarterback Stephen Morris said. “He can do it.”

At this point, few would doubt that.

Johnson had a 95-yard kick return for a score, a 50-yard touchdown reception and scoring runs of 1 and 28 yards for the Hurricanes (2-1), who trailed the Wildcats 7-0 for the second straight year before pulling away from their Football Championship Subdivision opponent and winning their sixth straight home opener.

Johnson now has six touchdowns in his first three college games, four going for at least 50 yards. He’s the first Hurricane with a four-touchdown outing since Tyrone Moss in 2005, and according to STATS LLC, Johnson became just the 10th player at the major-college level in the last seven seasons to have rushing, receiving and return touchdowns in the same game.

Not even a little?

The Hurricanes have raved about Johnson’s humble ways since his two-touchdown opener at Boston College – both of those scores exceeding 50 yards – and did more of the same on Saturday. Of Miami’s 11 touchdowns this season, six have been scored by Johnson, one of the nation’s most coveted recruits out of Miami Norland High last year.

“As I’ve said all along, he’s very mature in his work ethic, his approach, his preparation,” Miami coach Al Golden said. “You can ask him to do some things and he accepts it, he accepts that challenge and then goes out and executes it. He’s a kid that’s proving it to himself right now, not really to any of us. He’s one of those guys who’s got a standard of excellence right now.”

Johnson finished with 94 rushing yards and Morris shook off a rusty start and completed 20 of 35 passes for 211 yards for the Hurricanes, who return to Atlantic Coast Conference play at Georgia Tech next weekend.

Isidore Jackson had a 1-yard touchdown run for Bethune-Cookman (2-1). Rodney Scott had 72 rushing yards for the Wildcats, whose eight-game winning streak going back to last season was snapped.

Bethune-Cookman’s quarterbacks combined to complete just 10 of 25 passes for 122 yards, and another on a fake punt was intercepted.

“We just made too many mistakes, bottom line,” Bethune-Cookman coach Brian Jenkins said. “I don’t care who we played. We could have played the mighty midgets. With the execution errors we made today, they would have beaten us. Miami’s a good football team. They took advantage of our miscues.”

The Wildcats took a 7-0 lead when Jackson’s score capped a six-play, 20-yard drive set up when the Hurricanes’ Phillip Dorsett fumbled a punt return.

Last season, the Wildcats kept their edge on the Hurricanes for much of the first half.
This time, the lead lasted for all of 12 seconds. The Duke Show took care of that.

After Jackson’s score, Johnson took the ensuing kickoff, followed Dorsett through some gaping holes and sprinted untouched to the end zone, tying the game at 7-7. It was Miami’s first kick-return touchdown since Lamar Miller scored against Ohio State two years ago, and the longest by a Hurricane since Devin Hester ran one back 100 yards against North Carolina State in 2004.

He was just getting started.

Miami took the lead after going 50 yards in nine plays midway through the second quarter, Johnson getting the last yard after taking a pitch and running left, cutting inside Bethune-Cookman safety D.J. Howard and diving just past the goal line for a 14-7 Miami lead. The Hurricanes forced a three-and-out on the next Bethune possession, and Jake Wieclaw’s 20-yard field goal with 35 seconds left sent Miami into halftime leading 17-7.

Johnson dazzled again in the third, catching a short pass from Morris, waiting for some blocking to develop and sprinting 50 yards for his third score of the afternoon. His fourth score came with 8:25 left, a 28-yard rush that pushed the lead to 31-10 – and after that play, Johnson sprinted back to check on Maurice Hagens, who had just caught a pass on the previous play and threw a key block to spring Johnson free for his final score.

“I just want to say he’s amazing,” Miami offensive lineman Seantrel Henderson said. “I love the way he plays. I love blocking for him.”