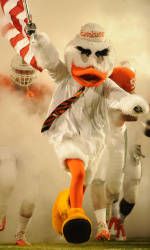 MIAMI GARDENS, Fla. – The BankUnited CanesFest and Spring Game was a success as the Orange Team battled the Green Team in a two-hour intrasquad scrimmage Saturday afternoon at Sun Life Stadium.

The Orange Team took home the win as RB Mike James scored the game’s only touchdown with just over four minutes left in the game and K Mike Goudis hit the PAT to give Orange the 7-6 victory. The Green Team connected on a pair of field goals by Jake Wieclaw in the second (35 yards) and fourth (29 yards) quarters.

As in the first two scrimmages, the Miami defense was clutch in the game. Overall, the Orange defense recorded a pair of sacks (Tyrone Cornileus and Olsen Pierre) and two interceptions (Brandon McGee and Vaughn Telemaque). The Green squad also notched a pair of interceptions (Ray Ray Armstrong and Thomas Finnie).

Three quarterbacks played in today’s game, including Ryan Williams for the Orange Team and the duo of Gray Crow and Preston Dewey for the Green Team. Williams was 15-of-27 for 169 yards and a pair of interceptions. Crow and Dewey combined for 18-of-33 passing for 151 yards as Crow was 12-of-21 for 95 yards and Dewey added 56 yards from 6-of-12 passing.

Offensively, 13 players had receptions on the day, eight of which were on the Green Team. WR Kendal Thompkins led all receivers with six catches for 45 yards while Green teammate WR Garrett Kidd reeled in three passes for 32 yards. For the Orange Team, WR Rashawn Scott totaled 74 yards on four catches with a long of 36 yards, while teammate WR Phillip Dorsett recorded four receptions for 60 yards, with his longest being 44 yards.

On the ground, Orange RB Mike James scored the game’s only touchdown and gathered a game-high 57 yards on 15 carries. For the Green Team, RB Eduardo Clements romped his way to 51 yards from 16 rushes while RB Darris Hughes had 32 yards on eight carries.

For play-by-play of the game, check out the live blog below.

3:47 p.m. – The Orange Team takes the lead with a 5-play, 65-yard drive. After Dorsett’s 44-yard reception, RB Mike James had a pair of rushes. After a 3-yard run, James punched through the line for a 5-yard TD run, the first touchdown of the game. K Matt Goudis split the uprights to add the PAT, giving Orange the 7-6 lead with five minutes left in the game.

3:27 p.m. – Defense continues to make great plays as DB Gunter forced a fumble on WR Rashawn Scott after a 36-yard reception. The fumble was recovered by DB Ray Ray Armstrong.

3:17 p.m. – QB Gray Crow with an 8-yard pass to WR Davon Johnson, but Crow was intercepted a few plays later by DB Vaughn Telemaque who returned the INT for 24 yards.

3:14 p.m. – Click here to check out the 2012 Spring Award winners, as announced by Coach Al Golden at halftime of the game.

3:13 p.m. – Just a reminder to join the 2012 College Football Hall of Fame Class in South Bend, Ind., this summer to celebrate the achievements of Hurricane legend Russell Maryland. The Enshrinement Festival kicks off on Friday, July 20 and continues Saturday, July 21. The festival includes the Downtown Block Party featuring a ribs cook-off, a corn hole tournament, live music and a spectacular fireworks display. Learn more about the College Football Hall of Fame Enshrinement Festival at www.EnshrinementFestival.org.

3:01 p.m. – After an 18-yard pass play from QB Gray Crow to WR Kendal Thompkins, the white team was set up with a 46-yard field goal with :01 left on the clock in the first half. K Jake Wieclaw missed wide left to end the half with White leading the Orange 3-0.

3:00 p.m. – In the next series, QB Gray Crow was intercepted by DB Brandon McGee, who had a 39-yard return. The INT lead to a 27-yard field goal attempt that was missed by K Matt Goudis.

2:50 p.m. – The Orange team looked to make some moves with a 25-yard pass play from QB Ryan Williams to WR Rashawn Scott, but two plays later, Williams was intercepted by DB Thomas Finnie.

2:23 p.m. – Halfway through the first of four 12-minute quarters, the Canes take a TV timeout.

2:21 p.m. – Click here if you’re looking for team rosters. The “Green Team” is wearing white today. Just a reminder that QB Stephen Morris will not play in today’s scrimmage.

2 p.m. – Seven minutes until kickoff. Keep up-to-date with the Miami Hurricanes on Twitter and Facebook throughout the game. When tweeting about today’s Spring Game, use the hashtag #USpringGame.

1:44 p.m. – The helmet tunnel is inflated, kickoff is just 22 minutes away. If you can’t make it out to the game, ESPN3.com will have a live stream of the game beginning at 2:07 p.m. (The game will be blacked out in Florida, Georgia and South Carolina).  The game will also be broadcast live on the Hurricanes flagship 560 WQAM. Joe Zagacki and Don Bailey Jr. will have the call and Josh Darrow will report from the sidelines. The game will also be broadcast on UM’s student station, 90.5 WVUM.

1:22 p.m. – Before heading out to Sun Life Stadium, click here to check out the 2012 Spring Game Program. Print it from home and bring it with you for up-to-date information on the Canes.

1:20 p.m. – The Hurricanes just wrapped up the autograph session in the 100-level concourse. More fans are streaming into their seats in anticipation for the 2012 Spring Game. No rain in the stadium, so come on out to Sun Life to watch the Orange Team battle the Green Team.

1:13 p.m. – The WinForever Clinic was inspiring. Here’s a link to Coach Golden’s intro to the event.

1:07 p.m. – The Spring Game is set to kick off in just one hour. The sun is shining and fans are making their way to their seats. Be sure you come out and take part in the Select-A-Seat event where fans can select available seats for the upcoming season that features home games against Florida State, Virginia Tech, North Carolina, NC State, USF and Bethune-Cookman.