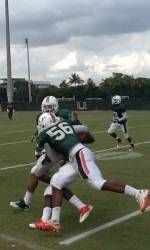 Canes Down to Final Practice Before Spring Game

CORAL GABLES, Fla. – The Miami Hurricanes football team hit the Greentree Practice fields Tuesday morning for the 13th practice of the spring. The team has one last practice remaining before the annual BankUnited CanesFest and Spring Football Game on April 14 at Sun Life Stadium.

Weather Report: 77 degrees with winds out of the north at 5 mph and 52% humidity.

After the usual circuits of drills and stretching, the first part of Tuesday’s practice focused heavily on special teams. Kickers Jake Wieclaw and Matt Goudis and punter Dalton Botts got heavy work in as field goals, extra points and punts were all practiced. Philip Dorsett and Dallas Crawford had some effective returns, but for the most part, the coverage units were in position to either force fair catches or tackle the ball carrier.

In full-team action, the offense was rolling today as they had production from a variety of different skill players. Mike James caught a ball from Ryan Williams in the middle of the field for a big gain, while Philip Dorsett and Davon Johnson caught several passes in the flats. Starting on their own two yard line, Ryan Williams completed a pass to Rashawn Scott who turned it upfield for a long gain. Ray Ray Armstrong stepped up for the defense and stuffed Mike James at the line of scrimmage, but Eduardo Clements finished the job on the next by playing breaking free of the defense for a touchdown.

In goal line drills, James carried the ball into the endzone for a score and Clive Walford made an incredible catch over Vaughn Telemaque for another score.

After a break, the team split into their respective teams for Saturday’s Spring Game. Offensive coordinator Jedd Fisch coached one side, while defensive coordinator Mark D’Onofrio coached the other. Anthony Chickillo was in the backfield on several plays, but the first team offense continued to excel. Eduardo Clements juked freshman Dwayne Hoilett for a long gain and Scott continued to elude the defense.

Offensive linemen Seantrel Henderson and Brandon Linder were praised by coaches for getting out and blocking well on a screen. The second team defense was all over the field, however, and looked like they had the offense’s number today. Highlights included a huge hit by A.J. Highsmith on Clements and a blocked field goal by Ricardo Williams.