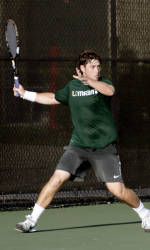 I started playing tennis when I was 7 or 8 years old. It started out as more of an after-school program when I was in elementary school at the Jewish Community Center in Miami Beach. I started swimming for a couple of years, but to be honest it was really boring. It was basically swimming in a pool for hours at a time. It wasn’t something I was interested in doing. I tried tennis and I really liked it. It turned into once or twice a week to every day after school from 5:30 to 7:30 p.m. When I was 13 I moved to Jupiter and lived with a coach. I went to a small private school and trained four to five hours per day. The school was really accommodating with my schedule. And, yeah, I’ve been playing ever since.

To be a Hurricane means to be living the dream.

My favorite ‘Canes of all-time would be the football greats like Ray Lewis, Ed Reed, and I really like Frank Gore. Ray Lewis is a beast.

If I could describe myself in one word it would be lovable. As in, I’m a good person and a good friend.

Nobody knows I can do 20 one-handed pushups, except for the guys on the team, because I’ve shown them.

If I won 20 million dollars in the lottery I wouldn’t drop out of school. I would definitely pursue a career in tennis after school. I’d travel around and play in all the tournaments, because those cost a lot of money. But I probably wouldn’t change much of the things in my life, because like I said, I’m living the dream right now.

In my refrigerator there is not a lot because it’s been a while since I’ve been to Publix. Maybe some eggs, bread, peanut butter and jelly. Pretty typical college student fridge.

When I’m not playing tennis I’m sleeping, watching TV or going to school.

When I look back on my childhood I will always think of how I still consider myself a child! But looking back on elementary school I will always remember the friends that I grew up with. I’ve had a pretty close group of friends since kindergarten and we still talk a lot and hang out a lot.

My dream job is to be a professional tennis player. That would be pretty sick.

The person I look up to the most is Sean McCarthy. He’s the husband of my old tennis coach, Brenda Shultz. I think he has the greatest outlook on life. Whatever you want or need in this world, he believes it will come to you. He’s one of the most positive people I’ve ever met and has been a great influence in my life.

If I could have one superpower I would choose super speed. I really like to go fast, and I like to get places fast. Super speed would be awesome.

If I could describe myself in one word it would be lovable. As in, I’m a good person and a good friend.

If I could visit one place in the world, it would be Israel. I’ve already been there, but I’m Jewish, so I feel a pretty strong connection to the country. It would be really cool to go back there and see all the history of the city, like Jerusalem.

I can’t go a week without watching Sports Center.

One thing on my bucket list would probably be to visit all four grand slams: Wimbledon, Australian Open, U.S. Open, and French Open.

I relax after a long day of practice or a match by going to my pool or Jacuzzi. I moved in with my sister, and she lives in a building that has a really nice pool and Jacuzzi. So you’ll find me there pretty much every night after school or practice.