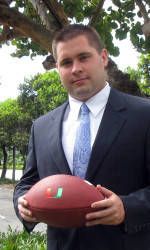 The World Upside Down

To be a Hurricane means my opportunity to play Division I football. Coach Golden and his staff gave me the chance even though I was under six feet tall. Most long snappers in Division I or the NFL are at least six-foot, so being a Hurricane really just means fulfilling my dream of being a Division I student-athlete. Everyone in my family went to college, but nobody else in my family played a sport, so it was a big deal.

One thing on my bucket list is to Ireland. I’m an Irish dude and my dad and grandfather have both been there. They always tell me I have to go so I’d love to see the motherland; it would definitely be a top vacation spot.

When I was six years old I was chubby, very rolly-polly, you could roll me down the street and I could keep rolling in that direction. I was obsessed with football. There are old pictures of me with a football in my mouth, I think I would cry whenever I didn’t have my little football with me.

One thing I will not eat is liver. My grandma says “you always have to try something once,” but I will never try liver. I’ve tried some really gnarly things just because my grandma put them in front of me, but liver would never be one of them.

When I look in the mirror I see a lot of things, I see someone who’s basically built himself up from negativity. Even back in elementary school, they said “you’ll never be the skinny kid,” in junior high they said “you’ll never get good grades,” in high school they said “you’ll never play college football.” My family and friends have been supportive but everyone from the outside world has always been negative to me. I just see a guy that’s always had to overcome so many obstacles to achieve what he wanted”

My favorite Coach Golden saying is every time one of the kickers has a huge punt or makes a 50-yarder he’ll come on to the field and just say “That’s a bomb bro” and I’ll just sit there and laugh.

Nobody knows I can understand and read Latin. It was just something in high school that I thought would be interesting to know. I love traditional things, so like when I went to mass when I was younger and the traditional service was read in Latin, I always thought it was cool to be able to understand it.”

If I could describe myself in one word it would be prosperous or undeniable, someone who overcomes, no matter whether it’s UTough or a big chemistry test or losing a family member, I always overcome.

Long snapping is my skill. It’s my drive and when I’m having a rough day, I can always go out to Greentree and go long snap and be good at it. It allowed me to play Division I football, because I was too short to play guard or defensive end. I knew if I wanted to continue to play football, it had to be Division I, but I was only getting Division III offers until a junior college contacted me about long snapping. I figured it was a good opportunity to save some money. Then I got contacted by some Division I schools after long snapping at junior college and I thought Miami would be a great choice.

My pre-snap ritual, which I’m notorious for is my heel click before the snap. I use it to make sure my feet are straight, people usually notice it, some people have commented on it. One guy said “you can’t always do an Irish jig on the field.”

The best advice I’ve ever gotten was from my long snapping coach in Arizona, Ben Bernard. Right before I came out here he said, “When you get out on the field, whatever you do, you let everyone know by the way you snap, that you’re the best in the country and no one can take your job. If you always think about that before you snap, you’ll be fine.” Whenever I think about that, I have a good snap.

I was raised in Bakersfield, California, by both of my parents.  I was raised around my high school’s football team, I was the little water boy running up and down the sidelines.

I admire my family for allowing me to leave as it’s been hard on my mom for me to be so far away and not be able to see me. I admire my grandpa Neal, who passed, for showing me how to cherish moments and how to support your family. He was an individual who got up at 5 a.m. to walk every day and then go straight to work and help people in divorce law. It was really special to walk down the street and have random people come up to me and ask if I was Neal’s grandson and to ask me to thank him for getting their kids back. Just to be able to help others as much as he did is an inspiration to me.

My most prized possession is my high school sectional championship ring. Back at my high school, winning a section championship is a huge thing, if you win one, people will remember for the rest of your life. The ring represents all the hard work that I put in, and it was the only team championship I’ve won so I will always cherish it.

To read more features, go to Behind the Facemask Central.