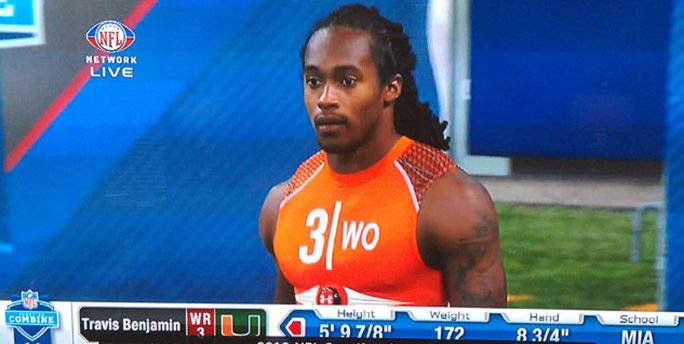 Congrats to wide receiver Travis Benjamin for posting the third-fastest 40-yard dash time of all players with an official time of 4.36 seconds. Benjamin also surprised people with a better showing than expected on the bench press, putting up 14 reps of 225 lbs. He leaped an impressive 38 inches in the vertical jump, putting him in the top 15 among all players. His strong combine, as well as his solid production on the field and kick return abilities are sure to shoot him up draft boards. Here are his measurables:

Lamar Miller Shows Off His Speed

Lamar Miller only participated in select events at the combine, but he definitely made his presence felt. Miller led all running backs in the 40-yard dash with a time of 4.40 seconds.  Below are his measurables:

Streeter Puts His Speed on Display

Scouts were impressed with Tommy Streeter’s measurables all weekend and the field events only made them more interested in the wide receiver’s talent and potential. The 6’5″ Streeter ran the 40-yard dash in 4.40 seconds, tying him with fellow Hurricane Lamar Miller and South Carolina cornerback Stephon Gilmore for the eighth-fastest time of the entire combine. Streeter also put up 225 lbs. 17 times on the bench press and leaped 125 inches in the broad jump. His 33-inch vertical jump demonstrated his ability to go up and get the ball above defenders. Below are his measurables:

Defensive end Olivier Vernonimpressed scouts his athletic abilities. His 122-inch leap in the broad jump ranks him fourth amongst all defensive linemen and his 31 reps in the bench press were third amongst all defensive ends. He further demonstrated his athleticism and speed by posting a 34.5-inch vertical and clocking in at 4.80 seconds in the 40-yard dash. Here are his measurables:

Spence Capitalizes on his Speed

Sean Spence had an impressive and illustrious career on the field with the Miami Hurricanes. His greatest strengths included his athleticism, leadership and incredible football instincts. He translated his game speed over to the 40-yard dash with a time of 4.71 seconds. He also posted a 33.5-inch vertical jump and a 119-inch broad jump. Spence confused some by underperforming in the bench press, but with the Hurricanes’ Pro Day fast approaching, he has a chance to redeem himself. Below are his measurables:

Spence has been projected as a mid-round pick, but many experts believe that whoever selects him will have a pure football player on their hands and quite possibly, one of the steals of the draft.  NFL.com’s Mike Mayock had this to say:
“I love Sean Spence. Someone is going to get a hell of a player.”

Defensive tackle Marcus Forston declared early for the NFL Draft after suffering a knee injury and missing 10 games this past season. He came to the combine with a lot to prove. His 35 reps in the bench press tied him for sixth overall at the combine. Below are his measurables:

Offensive lineman Brandon Washington was also an early entry for the draft, and his versatility along the line is key to many NFL teams. Washington put up 28 reps on the bench press, posted a 25-inch vertical leap and ran the 40-yard dash in 5.25 seconds. Here are his measurables:

Jacory Harris is a player that has been and will be under heavy watch during the pre-draft process. He has proven that he can play the position of quarterback at a high level, and must now prove to NFL scouts that he can do so on the NFL level as well. At the combine, his numbers were off the charts, posting a 4.72 second 40-yard dash as well as a 37-inch vertical and a 113-inch broad jump. Below are his measurables: