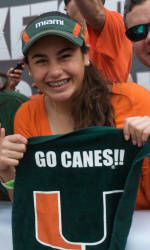 The Canes will begin Spring workouts on Saturday, March 3 at 8:30 a.m. with a closed practice. On Sunday, March 4, Golden will host “Fan Appreciation Day”.  Miami will practice six times before its first scrimmage followed by two more practices and a second scrimmage. There will be four practice dates in April culminating in the annual BankUnited CanesFest & Spring Football Game.

With the exception of Sunday, March 4, all practices are closed to the public.

Fan Appreciation Day
Coach Golden and the Miami Hurricanes will host “Fan Appreciation Day” on Sunday, March 4 from 11 a.m.-12:30 p.m.  Anyone that purchases a ticket to the Canes’ (March 4) baseball game against Florida will be granted access to the football team’s practice. First pitch is slated for 1 p.m.

Scrimmages
All practices are closed to the public, but Golden has opened up every spring scrimmage and is taking the events on the road.
The first will be held in Miami-Dade County and the second on Florida’s west coast in Lee County. The Canes first scrimmage will be held on Saturday, March 24 from 10 a.m.-Noon at Ted Hendricks Stadium in Hialeah, Fla. The second scrimmage will be held Friday night on March 30 at Bishop Verot High School in Fort Myers, Fla. A 6:45 p.m. kick is scheduled.

Southwest Florida Golf Classic & Luncheon
Following the Canes’ scrimmage in Fort Myers, the Hurricane Club will host a golf tournament on Saturday, March 31 at the Heritage Bay Golf and Country Club.  Registration is at 7 a.m. and a shotgun start at 8 a.m. Lunch and awards will begin at 1 p.m. The deadline to register for the event is March 23. Please contact the Hurricane Club for more information (305.284.6699).

BankUnited CanesFest and Spring Football Game
The Hurricanes spring practice schedule concludes on Saturday, April 14 with this free and open to the public scrimmage for the first time at Sun Life Stadium. The game will kickoff at 2 p.m. The schedule of events for the day will be released at a later date.

Select-A-Seat
In conjunction with the BankUnited CanesFest the Miami Hurricanes will be hosting a stadium wide Select-A-Seat. Fans are invited to come walk the Sun Life Stadium and select their seats for the upcoming season featuring home games against Florida State, Virginia Tech, North Carolina, NC State, USF and Bethune-Cookman.