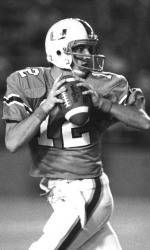 FORT WORTH, Texas – The Davey O’Brien Foundation today announced Jim Kelly as the recipient of the 2011 Davey O’Brien Legends Award, in honor of his outstanding contributions to the game of football both on and off the field. Kelly will be presented with the award at the 35th Annual Davey O’Brien Awards Dinner on Feb. 20, 2012 at The Fort Worth Club in Fort Worth, Texas.

“I’m very humbled to receive the Legends Award,” said Kelly. “It’s an honor to be included among some of the greatest quarterbacks to ever play the game.”

Established in 2001 to commemorate the 25th anniversary of the Davey O’Brien Foundation, the Legends Award recognizes a college or professional quarterback who has made a significant contribution to the game of football, distinguished himself as an extraordinary leader and demonstrated exemplary conduct on and off the football field. Past recipients include Bob Griese (2010), Dan Fouts (2009), Joe Theismann (2008), Steve Spurrier (2007), Paul Hornung (2006), Len Dawson (2005), Archie Manning (2004), Terry Bradshaw (2003), Bart Starr (2002) and Roger Staubach (2001).

“We’re honored to add Jim Kelly to our esteemed group of Legends Award recipients,” said Scott Murray, Chair of the Legends Committee for the Davey O’Brien Foundation. “Not only is he a Pro Football Hall of Fame quarterback, but he’s proven to be a committed leader off the field as well. His leadership and dedication to the game of football make him an ideal addition to the Davey O’Brien family.”

Born and raised in Pennsylvania, Kelly declined a scholarship offer from Penn State to play linebacker in favor of pursuing his career as a quarterback at the University of Miami. While playing for the Hurricanes, Kelly passed for 5,233 yards and 32 touchdowns, helping Miami restore itself as a premier collegiate football program. He was inducted into the University of Miami Hall of Fame in 1992.

Kelly was selected as the third quarterback in the 1983 National Football League (NFL) draft by the Buffalo Bills, but opted to play for the United States Football League’s (USFL) Houston Gamblers. In 1984, he was named USFL Player of the Year after passing for a league-record 5,219 yards and 44 touchdowns. Kelly began his career in the NFL with the Buffalo Bills in 1986 after the USFL disbanded.

Revered for quarterbacking one of the most prolific offenses in NFL history, the standout signal caller amassed 35,467 passing yards and 237 touchdowns in 11 seasons with the Bills. Kelly, who perfected the no-huddle offense during his tenure in Buffalo, passed for more than 3,000 yards in eight different seasons, was named to the Pro Bowl five times, and guided the Bills to eight post-season appearances and an unrivaled four consecutive Super Bowls (1991-1994). He was inducted into the Pro Football Hall of Fame in 2002, his first year of eligibility.

After retiring from the NFL in 1997, Kelly began his career in broadcast as an NFL Game Analyst for both NBC Sports and ESPN. He also runs an annual football camp for kids and serves as CEO of Jim Kelly Inc., which handles all of his business and marketing operations.

Kelly has also devoted much of his post-football life to his son, Hunter, who was diagnosed with Krabbe disease (Globoid-cell Leukodystrophy) and passed away on August 5, 2005 at the age of eight. Kelly and his wife, Jill, established an organization called Hunter’s Hope, to raise funds to fight the disease. Additionally, Kelly supports disadvantaged and disabled youth in Western New York via the Kelly for Kids Foundation.

Jim lives in upstate New York with Jill and their two daughters, Erin and Camryn.

About the Davey O’Brien Legends Award

Founded in 1977, the Davey O’Brien Foundation recognizes champions on and off the field through awards programs encouraging academic and career success. The Davey O’Brien Legends Award was established in 2001 to commemorate the 25th anniversary of the Foundation and to pay tribute to Davey O’Brien. The Legends Award recognizes a college or professional quarterback who has made a significant contribution to the game of football, distinguished himself as an extraordinary leader and demonstrated exemplary conduct on and off the football field.

About The Davey O’Brien Foundation