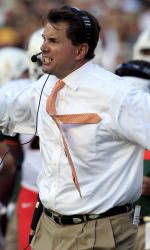 CORAL GABLES, Fla. – The University of Miami and head coach Al Golden have agreed to terms on a four-year contract extension that will run through February 1, 2020.  Golden, who took over the UM program in December, has the led the Canes to a 6-6 record during his debut season in 2011.

“I look forward to working side-by-side with Coach Golden for many years,” said Director of Athletics Shawn Eichorst. “Al has done a fantastic job of rebuilding and solidifying the foundation of our football program while fostering success both on and off of the field.  He has been a first-class representative of our University and I am confident that with Al leading the way, our future is very bright.”

After the game Coach Golden said, “I love it here. This is where I want to be, this is a destination job.”

“I just want to thank President Shalala for her leadership and Shawn Eichorst for his leadership. And clearly I’m just excited about the future. I’m ready to go on the road, I’ll be at the first kids house at 2 pm on Sunday. Again we have a lot of work to do, but we know where we are as a team and I wish we would have won today.

“I’m just glad I have the opportunity to be the guy to lead this program out of it.”

Coach Golden will be available to the media after the Canes game with Boston College and again on Monday, Nov. 28 at 9 a.m. Eastern for an end of the season press conference.