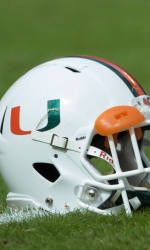 CORAL GABLES, Fla. — The University of Miami has made the decision to withhold the UM football team from bowl consideration following the 2011 regular season in response to the ongoing NCAA inquiry and has informed both the NCAA and the Atlantic Coast Conference of its decision.

We understand and share the disappointment that our student-athletes, coaches, staff, supporters and fans are feeling but after lengthy discussions among University leaders, athletic administrators and outside counsel, it is a necessary step for our University. The University of Miami has not self-imposed any other penalties.

The team was informed of the decision earlier today and is in preparations for their final game of the season.
As we stated in August, the University of Miami maintains the highest standards in our academic and athletic endeavors and we will remain steadfast in our commitment to building winning programs with the utmost of integrity.  We will be more vigilant in our compliance efforts and continue to work cooperatively with the NCAA on the joint inquiry to determine the true facts.
To continue to protect the integrity of the inquiry, the University will not comment further at this time.