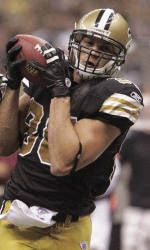 CORAL GABLES, Fla. — The Monday Morning ProCanes report will weed through all the NFL highlights and news to bring you the information you care about the most… what the former University of Miami Hurricanes did during the week prior. Even on a day when Hurricane legend Reggie Wayne moved into 19th place in all-time NFL receptions with 829, Sunday’s week ten action was all about the youth. Sophomore tight end Jimmy Graham continued his brilliant start to the season by extending the Hurricanes touchdown streak to 149 consecutive weeks, while two rookies stepped up in place of injured veterans and recorded impressive performances in new starting roles.

Colin McCarthy (Tennessee Titans) – 8 total tackles, 1 tackle for loss
The rookie fourth-round draft pick, making his first career start in place of injured linebacker Barrett Ruud, drew rave reviews in his team’s 30-3 victory over the Carolina Panthers. McCarthy, who led Miami in tackles with 119 in his final season as a Hurricane, led the visiting Titans with eight total tackles on Sunday. His strong showing at middle linebacker, including his first career tackle for loss, was the key for a Tennessee defense that managed to hold a star-powered Carolina Panthers to only three points in a rout at Bank of America Stadium.

Jimmy Graham (New Orleans Saints) – 7 catches, 82 yards, 1 touchdown
The sophomore tight end was sensational once again in his team’s 26-23 victory over division rival Atlanta. Graham, who recorded his sixth touchdown of the year on a 21-yard pass from Drew Brees, helped pave the way for a Saints offense that gained over 300 yards through the air. Graham, who has become Brees’ favorite target in only his second year, now ranks first among tight ends in receptions (62) and yards (873), and is closing in on the first 1,000-yard season by a Hurricane tight end since Kellen Winslow in 2007.
Video highlights: 21-yard TD | 29-yard catch

Leonard Hankerson (Washington Redskins) – 8 catches, 106 yards
A return to old stomping grounds sparked Leonard Hankerson to record his first breakout performance of his professional career. The rookie wide receiver, who recorded his second consecutive start for the Redskins after a strong showing in week nine, recorded his first career 100-yard game in his team’s disappointing 20-9 loss to the Dolphins at Sun Life Stadium. Hankerson, who has stepped up in the place of injured wide receiver and Hurricane legend Santana Moss, recorded the first 100-yard performance by a Redskins rookie since Rod Gardner in 2001.

Devin Hester (Chicago Bears) – 120 return yards, 1 touchdown
Even as younger Hurricanes stole the show in week ten, Devin Hester proved he is still among the league’s most lethal weapons in his team’s 37-13 rout of Detroit at Soldier Field. Hester, held out of practice for the week leading up to the game, returned his 12th career punt for a touchdown, tightening his grip of first place in the all-time record books. The Windy City Flyer is now only one return shy of Deion Sanders’ all-time record of 19 non-offensive return touchdowns in only his sixth season of professional football.
Video highlights: 82-yard TD