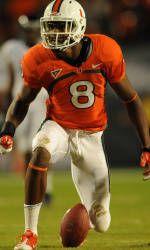 CORAL GABLES, Fla – For the first time in his career, University of Miami junior Tommy Streeter has been named ACC Receiver of the Week as announced by the Atlantic Coast Conference office on Monday.

Streeter, who has emerged as a leader for the Hurricanes offense this season, set career highs in both receptions (7) and yards (176) in Miami’s 28-21 loss to Virginia on Thursday night. Streeter also tied a career-high with two touchdowns in the game, giving him a team-leading seven on the season. His seven touchdowns are the second-highest total by a Miami Hurricanes wide receiver since 2005.

The wideout has solidified himself as a big-play threat in his junior campaign. Of his 28 catches in 2011, 12 have gone for 25 yards or more. His 21.57 yards per catch ranks third nationally and his 75.7 receiving yards per game is good for fifth in the ACC. With his 176-yard output against Virginia, Streeter also recorded his first career 100-yard game for the Hurricanes.

Miami will end its three-game homestand on Saturday with a conference match-up against the Duke Blue Devils. The game is set for a 3:09 p.m. kickoff and will be televised on the ACC Network.