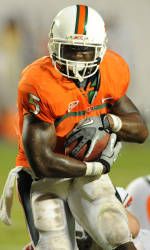 DALLAS (FWAA) – Miami’s Mike James is the weekly nominee for the 2011 Discover Orange Bowl-FWAA Courage Award, to be announced at the end of the season. James, a junior running back from Haines City, Fla., has persevered this season after the untimely death of his mother.

Elgusta James, 47, passed away as a result of a car accident in Haines City last December. Mike James’ older sister, Jasmine was driving and suffered serious injuries. His 5-year-old nephew Jayden was seriously injured, as well. Both have recovered.

The Hurricanes were in the midst of preparations for the Sun Bowl. Although his mother’s funeral was set for New Year’s Eve, the same day as the bowl game, James decided to play in honor of his mother, believing she would have wanted him to.

Elgusta James was Mike’s inspiration. As a child, he was overweight; his mother helped him shed pounds and become physically and mentally tougher in order to help him toward his dream of playing running back and college football.

In the Sun Bowl loss to Notre Dame, James had four carries and four catches for a total of 28 yards. Although Miami’s backfield was crowded with talented players, coaches gave him the first carry.

James told the Miami Herald last spring that dealing with his mother’s death has been “very tough day in and day out.”

“I’m doing the best I can,” he said, “coping and trying to play ball at the same time. … The smile is not like it used to be, but I wake up every day and try to be positive.”

Through seven games this season, James is the Hurricanes’ second-leading rusher, with 186 yards and three touchdowns on 50 carries. He has five catches for 33 yards and another TD.

“There are moments where he finally realizes his loss and then we’re there for him,” Miami coach Al Golden told the newspaper, “because he’s been there for all of us. He is just a great kid.”

The Courage Award was created by ESPN The Magazine’s senior writer Gene Wojciechowski, also an FWAA member. A select group of FWAA members vote on the recipient each year. The requirements for nomination include displaying courage on or off the field, including overcoming an injury or physical handicap, preventing a disaster or living through hardship.

About the Football Writers Association of America
The Football Writers Association of America, a non-profit organization founded in 1941, consists of more than 1,200 men and women who cover college football for a living. The membership includes journalists, broadcasters and publicists, as well as key executives in all the areas that involve the game. The FWAA works to govern areas that include gameday operations, major awards and its annual All-America team. For more information about the FWAA and its award programs, contact Steve Richardson at tigerfwaa@aol.com or 972-713-6198.