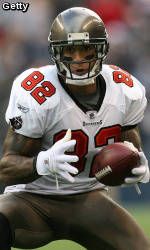 CORAL GABLES, Fla. — The Monday Morning ProCanes report will weed through all the NFL highlights and news to bring you the information you care about the most… what the former University of Miami Hurricanes did during the week prior. Even as injuries pile up for the former Canes, with wide receiver Santana Moss and running back Willis McGahee both suffering broken hands in Sunday’s action, “the streak” lives on. Hurricanes made an impact across the globe in week seven, as Kellen Winslow officially stretched the Canes’ legendary streak to 146 consecutive regular season weeks with his touchdown catch at Wembley Stadium in London, England. From the United Kingdom to the United States, four Canes stood out for their dominating play in week seven:

D.J. Williams (Denver Broncos): 5 tackles, 1 sack, 1 forced fumble, 1 fumble recovery
Making his return to Miami for a crucial road game against the Dolphins, linebacker D.J. Williams helped lead the Broncos to an important 18-15 win at Sun Life Stadium. Williams, who strip-sacked quarterback Matt Moore and recovered the ensuing fumble in overtime, celebrated his key turnover by throwing up “The U” in front of the Miami crowd. In only three games this season, Williams has 22 tackles (6th on team) and two sacks (tied for 2nd on team). With help from their seventh-year linebacker, the Broncos, who improved to 2-4 in the AFC West after a game-winning field goal, held the Dolphins offense to their third-lowest offensive output of the season.
Video highlights: Strip-sack in OT

Kellen Winslow (Tampa Bay Buccaneers): 4 catches, 25 yards, 1 touchdown
Over 4,000 miles away from his home in Tampa Bay, Buccaneers tight end Kellen Winslow still made his impact felt with his performance against the Chicago Bears. The Buccaneers tight end, who jumpstarted a furious fourth-quarter rally at Wembley Stadium that fell just short, officially extended the Hurricanes streak to 146 consecutive regular season weeks with his fourth quarter touchdown grab. Winslow, one of four former Hurricane tight ends with at least 200 yards through week seven, ranks fifth in receptions (31) and 13th in yards (282) among NFL tight ends in 2011.
Video highlights: Fourth-quarter TD

Jimmy Graham (New Orleans Saints): 6 catches, 54 yards, 2 touchdowns
Tight end Jimmy Graham, who has taken perhaps the most unlikely road to NFL stardom, was a key contributor for a Saints offense that racked up over 500 yards against Indianapolis on Sunday night. Graham, the second Hurricane tight end to score in week seven, had two touchdown catches in the third quarter of a 62-7 rout of the Colts at the Superdome. Graham, who has already tied his touchdown total from 2010 (5), has quickly become the favorite target of quarterback Drew Brees and is one of only six pass-catchers in the NFL with at least 600 receiving yards.
Video highlights:Four-yard TD | Second TD catch

Watch the ESPN NFL Countdown Feature on Jimmy Graham Below

DeMarcus Van Dyke (Oakland Raiders) – 4 tackles, 2 passes defended, 1 interception
Despite his team’s disappointing 28-0 loss at the hands of division rival Kansas City, DeMarcus Van Dyke enjoyed another strong performance in his third career start for the Oakland Raiders. The rookie cornerback, who ran the fastest 40-yard dash at the 2011 NFL Draft Combine (4.27 seconds), might have had a chance to return his first career interception for a touchdown before stepping out of bounds in the third quarter. Van Dyke, taken in the third round of the 2011 Draft, played an integral role for a secondary that held the Kansas City quarterback Matt Cassel to less than 200 yards passing, no touchdowns, and two interceptions thrown.
Video highlights: First career INT

After some dominating defensive performances from former Hurricanes in Sunday’s games, the best may be yet to come on Monday Night Football. The AFC North-leading Baltimore Ravens, featuring Pro Bowlers Ray Lewis and Ed Reed on defense, take the field against the Jacksonville Jaguars in an important divisional tilt. Kickoff for the game at EverBank Field is set for 8:30pm.