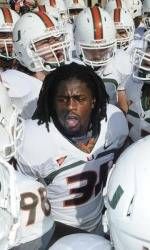 GREENSBORO, N.C. – For the second-consecutive week, University of Miami senior Sean Spence was named the ACC Linebacker of the week as announced by the Atlantic Coast Conference office on Monday.

Spence led all defensive players with 14 tackles, including a crucial sack late in the fourth quarter for a loss of seven yards. The Miami native finished the game with 1.5 tackles for loss.

Spence has been the anchor of the defense all season and has amassed 55 total tackles (11th nationally), 8.5 tackles for loss (eighth nationally) for 33 yards, three sacks for 23 yards and a forced fumble.

Miami will play in their its home game in three weeks when it welcomes Georgia Tech to Sun Life Stadium on Saturday. The game will start at 3:36 p.m. and will be televised on ESPN.