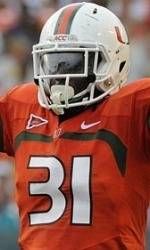 CORAL GABLES, Fla. –Pertinent information regarding the University of Miami’s home game against Bethune-Cookman on Saturday can be found here. Tickets, TV, radio, stadium, parking… we’ve got all the information fans need to be ready for the game.

Click HERE for a full listing of radio affiliates that carry Hurricanes’ games. The broadcast can also be found on Sirius channel 136

Parking Information
All parking lots will be open four hours prior to kickoff at 11:30 a.m, while Green lots and RV lots will open five hours prior at 10:30 a.m. Click HERE for Sun Life Stadium parking map.

Ticket Information
Great seats are still available for the Bethune-Cookman game, including the Michael Irvin 4-for-$47 deal. Call 1-800-GO-CANES, visit HurricaneSports.com or stop by the Hecht Athletic Center on campus (5821 San Amaro Drive) on Friday to get your tickets. The ticket office will be open until 5 p.m. On gameday, ticket offices at Sun Life Stadium will open at 11:30 a.m. at Gates B, D, F and H.

Hurricane Walk
Miami Hurricanes game day now has a new tradition after the resounding success of the Hurricane Walk prior to UM’s first two home games. Hurricane fans are invited to take part in the walk by forming a “human tunnel” from Gate H (Southwest Corner of Stadium) to Gate A. Join your fellow Hurricanes, the Band of the Hour, Sebastian and the cheer squads as the 2011 Miami Hurricanes football team walks from its arrival point into Sun Life Stadium. To take part in this event and welcome the Canes in grand fashion, make sure you are at Gate H two hours prior to kickoff when the team arrives. For the Bethune-Cookman game, make sure you are on site for the Hurricane Walk by 1:20 p.m. (Please note: The Hurricane Walk will take place this Saturday, weather permitting.)

Women’s Soccer Recognized
The UM women’s soccer team, which is off to a strong 7-3-1 start under first-year head coach Tom Anagnost, will be recognized on the field during the fourth timeout of the second quarter on Saturday.

The next day, the team will host to national power North Carolina at Cobb Stadium at 1 p.m. Fans who bring their football ticket from Saturday’s game can gain admission for just $1 to both the soccer match, and UM’s home volleyball match against Duke, which starts at 1:30 p.m. in the Knight Sports Complex.

Sunday’s soccer game has been tabbed a “Kick for the Cure” contest, as the team will show its support for breast cancer awareness by wearing pink warm up shirts prior to the match. The shirts will then be signed and sold to fans, while there will also be a silent auction held with memorabilia and team gear available throughout the afternoon. All proceeds from Sunday’s match will go the UM Sylvester Comprehensive Cancer Center.

Sideline Club
Select members of the Hurricane Club (Green or Gold Club Card holders) have the opportunity to watch the game from field level in the new Sideline Club, located in the Marlins’ bullpen area in the northwest corner of the stadium. To receive your “Sideline Club” wristband, enter through Gate G.

Honorary Captain
Legendary Cane Darrin Smith will be the honorary captain for Saturday’s game. Smith will join captains from both teams as well head referee Tom McCreesh at midfield at 3:30 p.m., two minutes prior to the scheduled kickoff at 3:32 p.m. Smith was a two-time Butkus Award semifinalist and UPI First Team All-America selection as a senior in 1992. He was also the first Hurricane ever to be named a National Football Foundation and College Hall of Fame Scholar-Athlete.

In addition to his participation in the coin toss, Smith will crank the Hurricane Warning Siren prior to the team running out of the smoke. He was also lead the “U Take a Bow” at the first timeout of the third quarter.

Power 96 DJs
In addition to music played by the Frost Band of the Hour, the Canes have brought in DJ Zog and DJ CX of Power 96 to play music during games this season at Sun Life Stadium.