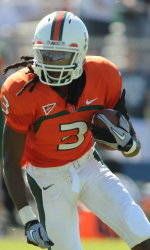 CORAL GABLES, Fla.—Tonight’s game at Sun Life Stadium has so many storylines away from the field, but ultimately it will come down to players making plays. Remember, Ohio State out-gained Miami by just one yard in Columbus a season ago. From a talent perspective, these teams see eye-to-eye. Assuming one isn’t completely hampered by turnovers as Miami was a season ago, this is the kind of game that will likely come down to playmakers.

Here are 10 players/match-ups that will go a long way in determining who wins tonight’s game:

1. #3 Travis Benjamin, WR, Miami –Benjamin, one of several Canes returning to the line-up after missing the Maryland game, is crucial to Miami’s game plan. Al Golden said earlier this week that he believes Benjamin might be the fastest player on the field Saturday night. That’s lofty praise, but it also means Golden is expecting big things from the senior from Belle Glade. He’ll be in the starting line-up at wideout, but maybe more importantly he is back in the return game, where he thrives and the Buckeyes have struggled. Remember, UM scored twice on returns against the Buckeyes last year, including a 79-yard punt return by Benjamin.

2. #11 Jake Stoneburner, TE, Ohio State—Stoneburner may be the most important player for the Buckeyes on offense. At 6-foot-5, 245 pounds, Stoneburner is a match-up nightmare and has clearly become quarterback Joe Bauserman’s go-to guy early this season. Through two games, Stoneburner has a team-high eight catches, four of which have gone for touchdowns. Clearly he is OSU’s No. 1 option in the red zone and there’s good reason as few teams can match up with his combination of size and speed. He’s clearly someone to keep an eye on tonight.

3. #40 Jake Wieclaw (Miami) vs. #48 Drew Basil (Ohio State), Kickers –If this game is close late, one or both of these inexperienced kickers will play a huge role in the outcome. Wieclaw made his only career attempt last week at Maryland (30 yards), while Basil has missed his only two attempts (40 vs. Akron, 47 vs. Toledo) this season. Neither has been the main field goal kicker in a game of this magnitude. It will be interesting to see who, if either creates their first big moment in their career.

4. #6 Lamar Miller, RB, Miami –At this point, Lamar Miller is going to appear on any list that includes key players for the Hurricanes. Everyone is the stadium understands that in order for the Canes to be successful, No. 6 needs to get his touches. He will, but it’s just a matter of how often and when. The Buckeyes will be ready for him, but can they contain him enough to change Miami’s plan?

5. #42 Andrew Sweat, LB, Ohio State—Sweat is the guy to watch out for on OSU’s defense. In two games, he has 11 tackles, three tackles for loss, an interception, a forced fumble and a pair of passes defended. A lot like Sean Spence, Sweat finds the ball quicker than most. He’ll be a factor in Miami’s running and short passing games, an area where RBs Lamar Miller and Mike James thrive.

6. #99 Marcus Forston, DT, Miami vs. #50 Michael Brewster, C, Ohio State – This match-up might get overlooked by some, but Forston vs. Brewster is like a heavyweight fight. Brewster is a four-year starter, was a Rimington Trophy finalist a season ago and is among the best at his position in college football. On the other side of the ball, Forston, despite recent injury setbacks, is primed to have a big season for the Canes. Few defensive tackles nationally were performing at the level Forston was late last season. He’ll have a battle on his handles today.

7. #5 Braxton Miller, QB, Ohio State –Buckeyes fans want to see their hyped freshman quarterback play, but so far this season it has mostly Bauserman. Miller played sparingly in season-opener, but didn’t get on the field last week against Toledo. His athleticism completely changes the Buck’s offense, making defenses prepare for the potential of him coming in for a series or two. Expect mostly Bauserman, but keep an eye out for No. 5 to make his first appearance in big time college football.

8. #7 Vaughn Telemaque, FS, Miami –Telemaque was Miami’s best player on defense in the opener against Maryland, pulling in seven solo tackles and picking off a Danny O’Brien pass in the endzone. Fans have been waiting for Telemaque to break out and this might be his time. He’ll have big assignments, covering Stoneburner is probably at the top of the list. How he and JoJo Nicolas play up the middle will be important tonight.

9. #72 Brandon Washington, OT, Miami vs. #54 John Simon, DE, Ohio State –Protecting Jacory Harris is vital to Miami’s success and Washington will be leading the charge. His task? Try and slow down John Simon, who replaces the departed Cameron Heyward as OSU’s top pass rusher. Last year, Heyward almost single-handily won the game for OSU. Now, it will be Washington’s job to make sure Simon doesn’t repeat that performance.

10. #12 Jacory Harris, QB, Miami – Of course he was going to be on this list. He’ll be the most talked about and most watched player tonight at Sun Life. But we put him at No. 10 because as Harris and Golden have said, he needs to be,”the distributor,” and get the ball to playmakers like Lamar Miller and Travis Benjamin. So if Jacory is more John Stockton than Allen Iverson, his playmakers will be the MVPs. And the offensive side of the ball will be happy and hopefully that means Canes Nation will overjoyed late Saturday night.