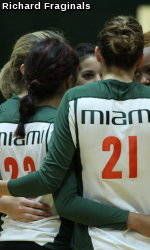 Coral Gables, Fla. – The University of Miami is set to open its 2011 campaign Friday afternoon when they travel to Baton Rouge, La. to participate in the Tiger Classic. The event is being host by LSU inside the Maravich Center.

The Hurricanes will open play in the Tiger Classic against Jacksonville State at 4:30 p.m. Miami will then play Louisiana-Lafayette (1:30 p.m.) and the host Tigers (7 p.m.) on Saturday to conclude the tournament.

Miami comes into the season with 11 returning letterwinners from last year’s team that finished 23-9 overall and advanced to the Bloomington [Ind.] Regional as part of the NCAA Tournament. Overall, the Hurricanes have five starters and their starting libero back for a season filled with high expectations.

Returning to the starting line-up for the Canes is 2010 AVCA All-America selection Lane Carico (Manhattan Beach, Calif.), who was also named Tuesday to the Preseason All-ACC Team. Carico, an outside hitter, enters the year needing just 139 more kills to break Karla Johnson’s school record of 1,484 set from 2002-05.

Also back in the starting six is redshirt senior setter Katie Gallagher (Winter Park, Fla.). Gallagher looks to become the school’s all-time leader in assists after being named an AVCA All-America Honorable Mention performer a season ago. Gallagher is also a member of the 2011 Preseason All-ACC Team.

More offense is expected to be supplied by redshirt senior outside hitter Christine Williamson (Tampa, Fla.). Hindered by injury for most of her career, Williamson enjoyed a breakout season in 2010, amassing a personal-best and team second-best 338 kills and hitting at a .266 clip.

Defensively, the Hurricanes return sophomore libero Ryan Shaffer (San Jose, Calif.) who set the UM record for digs by a freshman last year with a team-best 539. Joining her is senior middle blocker Ali Becker (Katy, Texas), who led the Canes in blocks last year with 96 (88 assisted). Becker ranks 10th all-time at UM for career blocks with 217.

Sophomore right side Alex Johnson (Tallahassee, Fla.) and redshirt freshman middle blocker Emani Sims (Glenview, Ill.) are also expected to see valuable time for the Canes. Johnson started in all 32 matches as a freshman in 2010, registering 205 kills and 53 blocks. Meanwhile, Sims redshirted her freshman season and is expected to contribute greatly with her athleticism. In the annual alumni match last Saturday, Sims recorded 11 kills on 19 swings.

All matches for the Tiger Classic will feature live stats, in addition to a live video stream for all matches involving LSU. The website for both stats and the video stream can be accessed by clicking here.