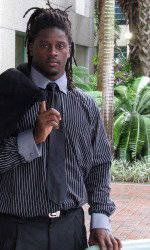 Behind the Facemask: Sean Spence

The U is a brand that is known all around the world.

Playing football has given me a lot of life skills. It’s taught me about being responsible, being accountable, being on time, and it’s taught me how to be a man.

When I played football as a kid, I pretended to be Barry Sanders. I played running back, quarterback and linebacker growing up. Whatever you name, I’ve played it.

When I got to high school, I started to focus on defense. The school I went to, you only had to play one way because you had so much talent.

Miami Northwestern is the best high school ever (laughs). The football program, the people that are involved in it, the fan base we have, it’s all special.

I secretly wish that people would stop thinking I’m quiet. A lot of people think that. In every interview, people tell me I come off quiet.

Working with the NFL players that come back is a great feeling. Seeing guys that you grew up watching, doing the same workouts you’re doing, and being successful doing it, you know you’re doing something right.

The University of Miami was close to home. It had a great football program. I knew I would come here and get a great education.

I admire Jonathan Vilma. He knows I look up to him.

Giving back is something I want to do when the opportunity presents itself. It’s something me and my mom always talk about, giving back to kids who don’t have anything.

My hidden talent is probably playing quarterback. I’m like Michael Vick, except right-handed.

Playing linebacker was something I knew I had a chance of being great at. Coming up, my tenacity to get to the ball, I knew I had it. In high school, there was a guy at running back already named Antwain Easterling, a lot of people will remember the name. I knew I wanted to play right away, and it wouldn’t be on that side of the ball, so I stayed on defense.

The Golden Era is going to be a good era. Coach Golden is going to do great things with this program and with this team. The way he runs things, he’s a great coach. He has a great personality, and he knows how to get to certain players. I think we’re going to be well prepared for games, and for life.

My favorite song right now is “The Real is Back” by Young Jeezy.

The best advice I ever received was to come back for my fourth year and get my degree. It was a tough decision. When I first read Coach Golden’s biography, and read the defense he ran were usually a 3-4 base, I thought it wouldn’t fit me. I thought about taking my chances and going to the NFL. My parents kept saying I should talk to him and see what he was planning on running, and I could make my decision then. When he told me he’d be doing the 4-3 defense, that kind of sealed the deal, and I started leaning more toward coming back.

When I look at myself in the mirror, I see a handsome young man (laughs). I see what God created. I see a guy who is not going to stop until he gets where he wants to be in life.

I wish my oldest brother would have gotten a break, and would have gotten a chance to play college football. Things didn’t go his way. He was supposed to get into a few schools and it didn’t work. He went to junior college instead, and it still didn’t work. He’s living through me, and I know I have to make it happen because he’s going to be there on my back if I don’t.

Becoming a man is being able to take care of responsibility, doing things that need to get done, and not making excuses. It’s about getting the job done.

If I weren’t playing football, I would still be in college trying to get a degree. Just based on the parents I have, they weren’t going to let me sit in the house.

When I was six years old, instead of playing peewee level, I played with the 85-pound level. I was only 50 pounds. The park I was at, they didn’t have 65’s at the time, so I had to play with the big boys. Everybody was bigger than me, but I was a starter and I played nose guard. I was quick; they couldn’t block me (laughs).

There’s no better feeling than hitting the quarterback. Knowing the quarterback doesn’t get hit in practice, when you get the chance in the game, there’s nothing like it. You try to get one of those “remember me” hits.

Running through the smoke is a great feeling. Watching it on television when I was younger, and now doing it myself, there’s nothing like it. It lets you know that it’s game time. You’re running through the smoke of storied tradition. Knowing that you’re going down the same path as guys who have great careers in the NFL, it’s awesome.

The new staff has been great. Sometimes you need a change. I knew Coach McDonald, because he tried to get me to come to Minnesota when he was there. I think the staff that Coach Golden brought in is a great staff. We’re going to be well prepared and well coached. I don’t think you’re going to see a lot of penalties, a lot of missed tackles, turnovers, missed opportunities, things like that. I know for sure we’re going to be in the best shape of our lives, and we’re going to be more unified than ever.

When you’re the quarterback of the defense, you need to know where everyone has to be. If they’re wrong, you have to line them up. If you see something, you can check out of it. You have to be a step ahead of all the other guys. Being a leader, it falls right into place. Guys are looking up to you to lead. It goes hand-in-hand, being the quarterback of the defense and being a leader.