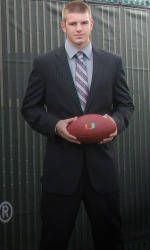 Behind the Facemask: Dalton Botts

Playing football has given me the opportunity to come here to Miami—an opportunity of a lifetime.

Competition is what I thrive on.

Punting is something that I just started doing two years ago. I don’t have my punting routine down. I played quarterback my entire football career. I was pretty good and that’s why I tried to play in college, but never got a chance so I just ended up punting. I went to a camp and did really well and then started getting offers from schools.

I secretly wish that I was as fast as Reggie Bush.

Family means a lot to me.

We are all family.

One thing everyone should know about Miami football is that it is one of a kind. There is nothing else that can touch us. It’s a very unique place.

My favorite midnight snack is anything I can get my hands on.

My favorite song right now is “Sassafras” by the Devil Wears Prada.

I’m a Hurricane because nothing can stop a hurricane.

People might be surprised to know that I’m the only person out of my high school in more than 30 years to go on to play a Division I sport—or DII or DIII. Everyone in my town stays there and works in the oil fields or goes to a junior college.

The actor that I would to play me in a movie is Johnny Depp.

The song no one would believe that I have on my iPod is probably some old school Lil Wayne.

I realized that when I played quarterback I enjoyed doing it, but I didn’t love it. Now when I punt, I look forward to it every day. Punting is the best position there is. I want to go out and work on it every day. I love going out pre-game and halftime and just hanging that ball up in the air and having the fans watch it is just awesome.

No one can believe I came from nothing and now I’m something at Miami.

If I could spend a day with anyone it would be Shane Lechler; the best punter in the NFL.

In high school I punted a little bit, but most times I would catch the ball and would take off running. I was all-state punter in high school, but I didn’t care about it. Who cares about punting? Now I realize the importance of punting and special teams. I was ranked No. 1 junior college punter in the nation. I thought that was awesome. I didn’t believe it when someone told me. I looked it up and was like, “WOW, that’s awesome.” I started getting offers from colleges who wanted to offer me full-ride scholarships—that was a dream come true.

There are a lot of influential people in my life. I can’t single out just one person. There have been a lot of people in my life who have helped me out from my parents to my pastor at my church. My family members, my whole family has never stopped believing in me.

California is the opposite of Florida. This is so funny, you know the Beats by Dre headphones, and those are huge out here. I’m talking to my buddies back home and asked if he knew what the Beats by Dre were and no one has ever heard of those headphones. Where I’m at, we’re just so far behind. Taft is a little town of 10,000. I love it.

Best advice is never give up. If someone tells you not to do something and you want to do it, do it.

When I was six years old, I could do anything. I was the king of kickball.

When I played football as a kid, I pretended to be any professional quarterback.

The hardest part is not being dragged down by others who are behind you.