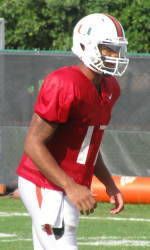 CORAL GABLES, Fla.– The University of Miami Hurricanes participated in the first of two practices Thursday morning, taking part in the second to last two-a-day session of fall camp on the Greentree Practice Fields.

Practice ran a little shorter than usual, with the team working out for just under two hours. The pace – as it has been every day since the team’s first scrimmage last weekend – was fast and efficient, a continued sign the Canes are aware of just how precious time is with the season-opener now less than three weeks out.

TWO IS BETTER THAN ONE
Thursday marks the fourth two-a-day practice session of fall camp for the Canes. Just one more day with multiple practices remains as the team prepares for its season-opener at the University of Maryland on Sept. 5. The final two-a-day session will take place on Saturday, August 20.

COWBOYS, STEELERS DEBUT AT GREENTREE
Scouts from the Carolina Panthers, Dallas Cowboys and Pittsburgh Steelers were in attendance during Thursday’s morning practice. It was the first time during fall camp that representatives from either Dallas or Pittsburgh have been at Greentree. Since the beginning of fall camp, members from 16 different NFL organizations have attended UMiami practices.

RB Mike James – All of the running backs looked good in the morning, but Mike James was the most impressive in 11-on-11 scenarios. He burst through an opening up the middle before being wrapped up after an 18-yard gain. Soon after, the junior caught a swing pass and barreled his way through a pair of DB’s for another solid gain.

Defense
DE Andrew Smith – Smith was able to slip into the backfield on a number of occasions, but his big play came when he beat the offensive tackle off the end with a speed rush and “sacked” Stephen Morris before he was able to connect with a wide open Allen Hurns.

LB James Gaines – Gaines continues to lead by example as the quarterback of the defense. The Buffalo native diagnosed several run plays immediately and was able to stop the back at the line of scrimmage multiple times. In 11-on-11 action he even hit RB Lamar Miller for a 4-yard loss.

REVISITING BEHIND THE FACEMASK
Throughout camp, we will revisit some of our favorite Behind the Facemask stories that have been running throughout the summer. Today, we’ll take a look back at Jordan Futch’s story….

“Competition is what I live for. It makes me a better person, a better man. It allows me to grow spiritually, emotionally, and physically.”

Behind the Facemask: Jordan Futch

Likewise, University of Miami President Donna E. Shalala issued a statement from the University Wednesday afternoon, reaffirming the University’s cooperation with the NCAA in their recent investigation into the Hurricanes athletic program.

“I am in daily communication with our Board of Trustees, Executive Committee, Director of Athletics, and counsel, and will continue to work closely with the leaders of our University.”

NEXT PRACTICE
The Hurricanes will return to Greentree Practice Fields Thursday afternoon for the second of two practices. This will serve as the fourth two-a-day session of fall camp.

SEASON TIX
Season Tickets for the start of the here.