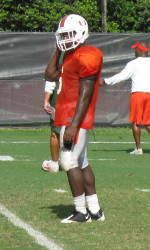 In Your Face
Tuesday’s evening session was spent in just helmets, shells and shorts, giving the team an opportunity to recover from the morning session while important special teams scenarios were rehearsed. However, the coaching staff and players were very enthusiastic about the physical nature of Wednesday’s practice.
Players were instructed to not tackle, but the sounds of shoulder pads cracking could be heard from every corner of Greentree. After individual position instruction, the Canes spent a vast majority of practice in 11-on-11 scenarios.

Brown, Patriots, 49ers Visit Practice
Scouts from the Cleveland Browns, New England Patriots and San Francisco 49ers were in attendance during Wednesday morning’s practice, marking the first time that the Patriots or 49ers have had a scout present this year at Greentree. Since the beginning of fall camp, members from 15 different NFL organizations have attended Miami practices.

High Performance Players
Throughout camp, HurricaneSports.com will highlight some of the best performers in each day’s practice. While there are certainly other players who stood out throughout the course of the session, these student-athletes in particular caught our eye.

Offense
TE Clive Walford – There is a lot of competition at tight end with almost all of them vying for a shot at playing time. He continued to build on his success the past few months on Wednesday morning, coming down with multiple grabs, including a spectacular 30-yard catch from Jacory Harris. Walford also had some tremendous blocks that created holes for the running backs.

RB Mike James – All of the running backs have elevated their game over the fall practices, but of the talented crew, it was Mike James who stood out on Wednesday. James had a 10-yard touchdown run, using his power to burst through the defense. He also had a nice catch on a swing pass and powered his way for 13 yards before being wrapped up.

Defense
DE Olivier Vernon – Vernon continued to make a case as to why he could be worthy of a starting spot come Sept. 5. He had multiple tackles for loss and received high praise from the coaches.  His highlight of the day came when he stopped James for no gain in a red zone situation.

LB Jordan Futch – Futch, also in a battle for increased playing time, stepped up in Wednesday’s practice. He fought his way through the offensive line on numerous occasions, disrupting both running and passing plays alike.

Here is a photo gallery of some of the action from Greentree today.

Behind the Facemask: James Gaines

Next Practice
The Hurricanes return to practice tomorrow at 8:20 a.m. in the first of two sessions on the day. The fourth two-a-day of fall camp will conclude with an afternoon practice.

Season Tix
Season Tickets for the start of the Al Golden Era and the 2011 Hurricanes Football Season are on sale now. For more information call 1-800-Go-Canes or purchase your tickets through HurricaneSports.com here.