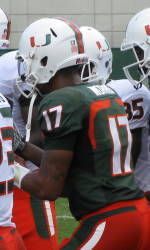 CORAL GABLES, Fla. – Quarterbacks Jacory Harris and Stephen Morris combined for five touchdown passes and only one interception in the first scrimmage of fall camp Sunday afternoon on the Greentree Practice Fields.

With the heat index floating around 100 degrees over the duration of the two-hour session, Miami worked through nearly 100-plays in the first of two scheduled fall scrimmages.

After the day opened with goal line situations, the offense had two possessions from their own two-yard line before alternating from various spots on the field, finally closing the scrimmage with 4th-and-1 situations and a two-minute drill.

Junior wideout Tommy Streeter had the best offensive day for the Canes, catching five passes for 71 yards and three touchdowns. Each of the 6-foot-5 receiver’s touchdowns came in the redzone, with two coming from Harris.

Lamar Miller found big openings for gains of 16 and 31 yards on the opening drive, but a James Gaines interception in the endzone ended the scoring threat. The turnover was the first and only from the Miami offense on the day.

Gaines later added a sack and finished with five tackles.

Golden Rules
Before camp began, head coach Al Golden emphasized the importance of quarterback play and limiting turnovers. The quarterbacks combined for 407 yards through the air on 38-of-52 passing for six touchdowns and only one interception.

Giving `em the Boot
Former All-ACC specialist Matt Bosher is now with the Atlanta Falcons, but junior kicker Jake Weiclaw was impressive in connecting on 2-of-3 long field goal attempts. The New Lenox, Ill. native was successful from 45 and 54 yards out on consecutive possessions, before narrowly missing left on a 56-yard attempt.

Fellow senior Ramon Buchanan and freshman Gionni Paul and each had six total tackles, with Paul also recording a tackle for loss. In all, the defense totaled eight tackles behind the line of scrimmage for a total loss of 29 yards.

Cory White and Clive Walford stood out among the tight ends, making key grabs in the middle of the field and in the flats.

– With Marcus Forston in his face, Stephen Morris hit Travis Benjamin for a 47-yard touchdown down the right sideline
– Fullback Maurice Hagens rumbled for 20 yards on a second half possession
– Asante Cleveland, Mike James and Lamar Miller each had touchdowns in goal line situations
– In eight plays run in 4th-and-1 situations, the defense held on five occasions

Season Tix
Season Tickets for the start of the Al Golden Era and the 2011 Hurricanes Football Season are on sale now. For more information call 1-800-Go-Canes or purchase your tickets through HurricaneSports.com by CLICKING HERE.