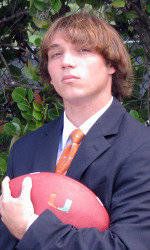 Behind the Facemask: Chad Barnes

CORAL GABLES, FLA–They are stories of perseverance. Stories about growing up, becoming men and being a part of a family. One-by-one, we hear from them. These are the Miami Hurricanes…

My favorite song right now is “Success Is My Cologne” by Curren$y.

I’m a Hurricane because of hard work and dedication.

My favorite thing about being part of the U Family is being with everybody. I really like everyone on the team. The environment and the people are what make it special.

At the U, I’ve learned so much from the players here. The receivers especially, they tell me what to do and I’ve gone through a lot with them. They’ve taught me the most out of everyone here.

Coach McDonald is really funny and he’s a real fun guy to be around. He reminds me of one of my favorite coaches back in high school.

Other than football, I’m talented at soccer, skateboarding and a lot of other sports too. This is the one sport that I’m most passionate about. I’ve been playing soccer for 10 years or so, and played a bunch of other sports for a few years here and there.

My favorite midnight snack is an Oreo frosty from Wendy’s.

If I were a superhero, my superpower would be the ability to teleport.

The song no one would believe I have on my iPod has to be something by Taylor Swift.

People might be surprised to know that I’m only 5-8. If I was to talk to somebody and they didn’t know who I was, and they stand next to me, they’re shocked I’m only 5-8, because I look stronger and bigger than that. I think that’s the biggest surprise to people.

If I could spend a day with anyone, it would be Santana Moss. He was a walk-on when he came to Miami as well, so he’s definitely the one I would want to talk to about it. He’s one of my idols for sure.

The best advice is to keep your head up. Don’t ever beat up on yourself or feel shameful.

When I played football as a kid, I pretended to be Santana Moss (laughs). That’s how it was for me. If I was playing defense, it was usually Sean Taylor.

When I was six years old, I went to the Olympics in Atlanta.

Playing football has given me personality and character. Those are the two biggest things. Once I left football the past two years, I felt like I drifted away from what I was trying to do. I felt weird. I didn’t feel like I was really me. I started working out, I started hoping for the best and didn’t know what to do. Finally, when I got back into this, I was really happy once again.