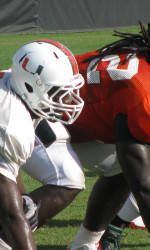 CORAL GABLES, Fla.—The first of two practices on Saturday took place in the morning at Greentree Practice Fields as Miami continues its final preparation for Sunday’s first team scrimmage. The day’s second practice has been moved to the early afternoon in anticipation of strong weather moving into the area during the early evening hours.

The Hurricanes worked out in full pads during the morning session, though holding a slightly shorter practice with a second practice session looming. Temperatures reached the high-80s with a few clouds overhead.

The third and fourth stringers got more reps as they stayed on the field longer than guys on the preseason two-deep. Saturday afternoon’s second practice will be the last before Sunday’s closed scrimmage at Cobb Stadium.

BLOWING THE WHISTLE
With several veteran Canes donning the “coach’s cap” in the first practice of Thursday’s two-a-day, head coach Al Golden gave five more veterans the opportunity to serve as player-coaches for Saturday’s first session. Harland Gunn, Marcus Forston, Jacory Harris, Lee Chambers and Ramon Buchanan dressed in shorts and t-shirts while wearing a whistle around their neck and worked alongside UM’s regular assistants in coaching up their fellow teammates.

SCOUTING THE CANES
The Indianapolis Colts and Atlanta Falcons made their first appearance at Canes Camp on Saturday morning, marking the ninth and 10th NFL teams to have assigned scouts to Greentree over the last six days.

Offense
QB Spencer Whipple – With Jacory Harris serving as a player-coach for the opening practice of Saturday’s two-a-day session, Whipple capitalized on his opportunity to get valuable repetitions. He had two runs of 20-plus yards, as well as two 45-yard touchdown passes. The TD passes were completed to receivers Tommy Streeter and Kendal Thompkins.

WR Tommy Streeter – As a member of the impressive receiving corps for the Canes this season, Streeter stood out by using his tall frame to haul in several passes from quarterbacks Whipple and Stephen Morris. He caught a 45-yard touchdown strike from Whipple and had another 30-yard catch from Morris.

Defense
LB Kelvin Cain – The Clovis, Calif., sophomore elevated his game to another level in Saturday’s morning session with a handful of tackles and an interception. Cain received high praise from members of the coaching staff on several occasions throughout practice.

DB Vaughn Telemaque – Another California native stepped up to the plate defensively in the morning round of Saturday’s two-a-day, this time in the form of Vaughn Telemaque. He had another big practice making numerous plays. Telemaque had a huge hit on a run up the middle, in addition to a tackle behind the line on running back Lamar Miller.

HEREfor a photo gallery of some of the action from Greentree today.

REVISITING BEHIND THE FACEMASK
Throughout camp, we will revisit some of our favorite Behind the Facemask stories that have been running throughout the summer. Today, we’ll take a look back at Asante Cleveland’s story….

“Playing football has given me a top college education, some life-long friends and a new environment that is way different from my childhood in California.”

Behind the Facemask: Asante Cleveland

IN CASE YOU MISSED IT
On Thursday, Canes All-Access released this behind the scenes camp story with senior defensive tackle Marcus Forston. It’s well worth your time if you haven’t had a chance to watch it yet…

NEXT PRACTICE
Miami returns to Greentree Saturday afternoon for the second of the day’s two-a-day practice session at 3 p.m.

SEASON TIX
Season Tickets for the start of the CLICKING HERE.