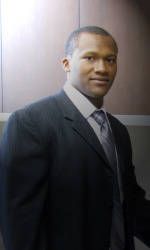 Behind the Facemask: Nate Gholston

CORAL GABLES, Fla.–No dream comes true without sacrifice and these young men have worked to make their dream of playing at the U come true. Here are the men behind the sacrifice…

My favorite song right now is “I’m On One” by Drake and Lil Wayne.

One thing everyone should know about Miami football is that we put in a lot of work. I know a lot of people, when they hear about the school and the football team, they think of a bunch of great players that have all this talent, so the team will automatically be good when they get out there on the field. What they don’t realize is that we have to wake up every morning, lift all these weights, run all these conditioning tests and all this other stuff. When they think about the team, they think of these giants out there who have been playing football their whole life. Some of that may be true, but it doesn’t translate to success on the field unless you put in a lot of work behind the scenes.

I started playing football when I was nine. I played pop warner football in Michigan. When I first started playing, I was a left guard and a linebacker. It was fun, a bunch of little kids running around, but I scored my first touchdown at defensive line. Somebody hit the quarterback, ball floated up, I caught it and took off running for about fifteen yards and a touchdown. I’ll never forget that one.

When I played football as a kid, I pretended to be Barry Sanders. I’m from Detroit, so growing up, you always heard how Barry Sanders was the best running back. I was never the biggest kid out there, so I thought I would just shake them, running like Barry did out there.

Detroit is all about hard work. It’s a blue-collar city. My mom works for Ford Motor Company, and by grandfather worked for Detroit Edison, so I was always imagining people working on the line. They don’t work on the line, but that’s the mentality that goes along with it. If you want to eat today, you have to work today. That’s the mentality we’ve always had.

Other than football, I’m talented as a jack-of-all trades. I ran track here and I like to play a little basketball, but I’m working on my shot. I also like to do a lot of reading. I read really quickly. I’ll go through 700-page books in a night. Me, my sister and my mom all read really, really quickly. The latest book I’ve read is State of Fear by Michael Crichton.

My favorite book series is either the Dan Brown series (The DaVinci Code, Angels and Demons) or the Harry Potter series. I’m a sci-fi type of guy, so I read a lot of Star Wars books and stuff like that.

I never thought I would really make it here. It was out of the way to get here, the way things happened. Coming out of high school, I wasn’t really highly recruited for football or sports in general. I started off with plans of heading to the University of Michigan. I had applied to Michigan, Purdue, Michigan State, Harvard and Cornell. Right before I was supposed to move into school, Michigan sent me a letter saying that my admission had been rescinded because I failed the second semester of AP Calculus in high school, even though I was taking classes that summer. Because I applied to the College of Engineering, I was out. I went to a branch campus for a semester, and enrolled there the day before classes were supposed to start. The second time around, I applied to Miami, Florida, Northwestern and Michigan State. All the other schools said I would have to wait a year before I could come in, but Miami said I could come here the second semester. I came in January 2008 and was a regular student walking around campus until I met one of the guys on the track team, Patrick Blackey. I told him I used to run track back in the day. Next thing I know, I’m running track. Then, I talked to Coach Shannon, and he encouraged me to play football. I took the back door onto the team, but I’m here.

I’m afraid of not living up to expectations. I know growing up I had always been pretty good at whatever I was going to do. I would pick things up and start running. I played sports and I was a pretty good student all the way through high school. I know my family’s proud of me no matter what I do. Trying to live up to my own expectations is what I focus on. You’re your own worst critic.

I’m studying aerospace engineering and I’m playing football. I didn’t want to quit either. So I’m still doing both. I didn’t want to make the team and not play in any games. Last season, I made the bus for every game. I just have to keep it going.

I remember my mom used to get on me in high school because I was always one of the last players out on the field. When I was in the tunnel for the first time, I remember thinking how I was going to sneak my way up near the front. I was going to run out with Coach Shannon and Sean Spence and Sebastian! (laughs) I snuck my way up there, but I didn’t really know what to do. Everybody started shaking the helmet, so I started shaking it too. I saw the extinguishers turn on, and that was it, so I started running. You can’t see anything. The smoke is so thick you can’t see your hands in front of your face. I started running and I had to stop, because I realized I had no idea where I was. I was worried I might trip. I started doing high-knees all the way out until the smoke cleared. It was a great experience. (laughs)

At the U, I’ve learned so much from my friends throughout campus. You get to meet a lot of different people down here, especially coming from Michigan. We’re not as diverse as Miami up there. When you get here, you get to see where different people come from, people from all walks of life.

If I could spend a day with anyone, it would be President Obama. I want to see what it’s like, all that pressure. I think I know pressure, playing in games and dealing with that, but when you’re the leader of a nation, all eyes are on him at all times.

The Golden Era will be special. I can see changes made already. Coach Shannon will always have a special place in my heart, he gave me my shot out here. I just know that these new coaches, under Coach Golden, they stress a lot of hard work and I respect it. You can be the greatest player in the world, but if you don’t work at it, it won’t translate into wins.

Never give up on yourself. Even when you think something’s not going to work out for you, keep trying. My grandfather would always push me into stuff as a kid, always telling me to give things a shot. I never really understood why. When you get on your own, you realize it. I’m 1,300 miles away from my family, and being out here, I know things are alright.