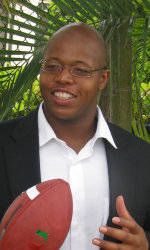 Behind the Facemask: Harland Gunn

CORAL GABLES, Fla.–There are moments and decisions in every person’s life that shape who they eventually become. Every path is different, but for these student-athletes, they have all eventually led to Coral Gables. Their stories in their words…

Omaha is America’s best-kept secret. I like that it’s cozy. Life doesn’t move too fast or too slow. It’s just right, it’s perfect.

I didn’t grow up watching sports. I watched television, but was not a big sports fan. I saw a few football movies, and that’s what really caught my eye and brought football to my attention. Little Giants was the one that started it all. I was seven years old when I had my first football practice.

Protecting the quarterback is a tough job, but somebody has to do it.

When I was six years old I could still buy my sneakers from the shoe store (laughs). I’m a size 15 now, I have to special order my shoes.

The U is special.

We are all together.

Playing football has given me an opportunity to better myself in life.

I feel like I’ve been this size my entire high school career. I’ve been 6-2 awhile. I was always heavy. I would say I hit my growth spurt around the summer of eighth grade. My voice got deeper, just started growing, all that good stuff.

The transition was kind of difficult, I can’t lie. One thing I had to get used to was how people act down here. People in Nebraska acknowledge you, they’re courteous when they’re driving and they’ll turn their blinker on. Not here (laughs). But there are a lot of things I like about Miami, so I take the good with the bad.

I was raised by good respectful people and I’m thankful for that.

Competition is necessary for growth. It’s fun. It can bring out the ugliness in people, but it can bring out the best in some people too. I really feel it does that here; it brings out the best in everybody. When I approach it, I have fun with it. I like competing, because it keeps me on my toes and takes my game to another level. At the same time, I have somebody else trying to bring their game up and take my spot. I welcome it, because it makes everybody better. Who doesn’t want that?

The offensive line is real tight. We’re the big boys on the team, and so we tend to gravitate toward each other and we can relate to each other more. It’s just a natural bond. Once you’re in terrible situations with somebody over the course of four or five years, you become tight. I don’t see how you could function if you weren’t tight. I feel like I can rely on them for anything, and I know they can rely on me for anything. I’m tight with the whole line, but I do have a friend who I feel is a brother of mine – Jared Campbell. He and I were roommates since we came in and we have the same birthday.

I secretly wish that I was a little bit taller. (laughs) I would play a little basketball and probably get into some other sports.

I have three sisters and one brother, and I’m the middle child.

Twitter is dangerous if you allow it to be, but Twitter’s fun at the same time. I like it.

Harland is my father’s name, and I’m the junior. My son will be Harland III.

Legacy, especially my legacy, is something that I feel is very important. I dedicate each day of the present so that my legacy that follows is positive.

A lot of people don’t know that I’m wise for my age. I like to joke, to laugh, and have a good time. I’m a pretty quiet guy when I’m going to and fro, but that’s just because I don’t feel the need to be loud all the time. I feel that people should most definitely laugh a lot, because it adds years to your life and takes the stress out of it

The stress is hard. There are times when you don’t want to be bothered with it. Of course you have your family, your academics, and football. You want to maintain each of the three, but it’s hard. One might be failing and you start focusing on that, but when you bring that up to par, something else is failing. You want to take your attention and spread it across all three, but sometimes you can’t. You have the physical strain on top of the mental strain, and I think people see the physical strain, but there’s also psychological part of things that people don’t really see or people can’t understand because they haven’t done it. It can get the best of you if you let it. But just making it through this thing, you’re separated from a whole lot of people because you’re able to deal with so much more stuff. It makes you tough all-around, physically and mentally, if you can push through it. I take the good with the bad. It’s not all that bad, but some days it is hell.

Learning the playbook was actually fun for me. It wasn’t rough. After I learned my first college offense, which was the hardest part for me because I had to actually develop skills for me to learn that much offense. Reading defenses, stuff like that was completely different from high school to college. I had to study it, to write stuff down, to watch film, and keep going over it until I understood it, breaking it down in concepts. When I learned the second offense, it was fun because I was comparing the two, and had a nice foundation to build off of. This offense is just a little bit bigger than the other one, because it’s complex and challenges you, and if we can master it, we’ll give teams more to break down.