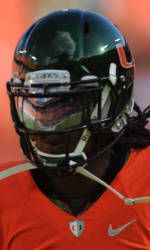 CORAL GABLES, Fla. – The University of Miami football program has announced several number changes on its roster, with Storm Johnson, LaRon Byrd and Tommy Streeter among those who will wear a new number this upcoming season.

Another notable number change on the roster is Cory White switching from No. 71 to No. 84 with his move from the offensive line to tight end.

Early enrollees Blake Ayles, Thomas Finnie and Olsen Pierre have also received their first numbers as `Canes. Ayles will wear No. 86, Finnie will wear No. 20 and Pierre will don No. 91.

With his return to linebacker after a brief stint at tight end late last season, Jordan Futch will again wear No. 58.

All four eligible quarterbacks kept their numbers from last season, with Jacory Harris wearing No. 12, Stephen Morris wearing No. 17, Spencer Whipple wearing No. 16 and Alonzo Highsmith wearing No. 11. Tate Forcier, who must sit out the 2011 season due to transfer rules, has yet to receive a number.

Click here for an updated roster that notes the number changes at this time.