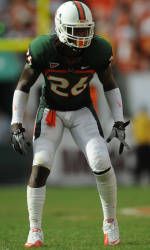 CORAL GABLES, Fla. – Three members of the 2010 University of Miami football team have been named to the 2010 All-Atlantic Coast Conference Academic Football Team, as announced Wednesday by Commissioner John Swofford.

Sophomore Ray-Ray Armstrong and seniors Pat Hill and Ryan Hill were named to the 52-member squad after a standout year in the classroom. With the honor, Armstrong becomes one of just nine players named the academic team that also earned All-ACC recognition on the field in 2010.

To be eligible for consideration for the All-ACC Academic Team, a student-athlete must have earned a 3.00 grade point average for the previous semester and maintained a 3.00 cumulative average during his academic career.

Armstrong and Ryan Hill tied for a team-best three interceptions (along with Vaughn Telemaque) this past season while Armstrong was Miami’s third-leading tackler with 79 total stops from his safety position. Ryan Hill, who was awarded the U Miami Sports Hall of Fame Unsung Hero Award at the team’s postseason banquet, finished the year with 51 tackles and eight pass break-ups.

Pat Hill served as Miami’s starting fullback in 2010. Used primarily as a blocking back, Pat Hill garnered three awards at the team’s postseason banquet: Training Room Comeback Player of the Year; Mariutto Family Scholarship Award for Academic Excellence; and the Melching Leadership Award (as voted on by his teammates).

All 12 ACC schools were represented by at least one selection on the team. The ACC has selected an All-ACC Academic Football team every year since 1954.

A total of five members of the team– including Pat and Ryan Hill – have already graduated and either was in graduate school or pursuing a second bachelor’s degree this past fall.

* Denotes student-athlete has already graduated and was in graduate school this past fall. Class refers to athletic eligibility