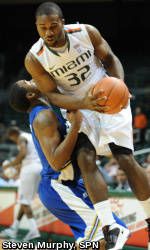 Winners of four straight and nine of their last 10, the Hurricanes will play their first two conference games on their opponents’ home court, following the opener at Duke with a match at Clemson on Sat., Jan. 8. Miami has won two of its last three games versus ACC opponents — with the loss a 77-74 decision to Duke in the 2010 ACC Tournament semifinals.

The Hurricanes are led by three players averaging double-figure points. Malcolm Grant is contributing a team-high 15.9 points per game — seventh-best in the ACC, and also ranks among the league’s leaders in free throw percentage (.905, 2nd), three-point field goal percentage (.455, 3rd), three-point field goals made (2.5, 4th) and assists (3.8, 9th). Durand Scott adds 13.5 points and 3.6 assists an outing, converting better than 46 percent from both the field and long range and shooting a much-improved 85.1 percent from the line (compared to 67.0 percent as a freshman in 2009-10). Reggie Johnson averages nearly a double-double with 12.1 points and 9.9 rebounds per game, while shooting 71.4 percent from the charity stripe.

Although Duke leads the all-time series versus Miami, 13-2, the last four meetings have all been decided by single digits — including the last meeting between the programs, a 77-74 Duke victory in the semifinals of the 2010 ACC Tournament. The Hurricanes last defeated Duke, 96-95, on Feb. 20, 2008, in Coral Gables. Over the last four meetings between the teams, the average margin of victory has been just 3.5 points per game. Miami has led the Blue Devils at the half in each of their last four contests.

In the last meeting, Kyle Singler scored 27 points to help the Blue Devils push ahead in the second half to beat Miami 77-74 in the ACC Tournament semifinals (Mar. 13, 2010), sending Duke back to the championship game for the 11th time in 13 years. Jon Scheyer added 16 points, including eight in the go-ahead 15-0 run early in the second half. The top-seeded Blue Devils (28-5) trailed 35-32 against the 12th-seeded Hurricanes (20-13) at halftime. Then-freshman Durand Scott had 21 points for the Hurricanes, who put up plenty of fight but couldn’t follow their upsets of Wake Forest and Virginia Tech with a much bigger one. In the ACC semifinals for the first time in its history, Miami used a 17-2 run to erase a 12-point deficit and take the halftime lead on Malcolm Grant‘s long 3-pointer with 5 seconds left. The Hurricanes got within five points five separate times in the last 90 seconds only to see the Blue Devils respond with either a basket or free throws.

In a pair of meetings versus Duke as a true freshman in 2009-10, Durand Scott averaged 20.0 points, 4.0 rebounds, 3.5 assists and 2.0 steals versus the Blue Devils, converting 67.9 percent from the field (19-28). In his first contest versus Duke on Feb. 17 in Coral Gables, Scott finished with 19 points, four boards, four assists and two steals in 32 minutes, shooting 69.2 percent from the floor. In the ACC Tournament semifinals in Greensboro, N.C., he added a team-high 21 points, four rebounds, three assists and two steals in 35 minutes on 66.7 percent field goal shooting.

Miami’s starting backcourt of Durand Scott and Malcolm Grant has improved its accuracy from the line. Entering Sunday’s game versus Pepperdine, Grant has hit 55 of his last 58 free throws dating back to the Dec. 4 win over West Virginia, going 13-14 versus West Virginia, 5-5 versus Stetson, 6-6 versus UCF, 9-9 versus Oral Roberts, 5-6 versus Rice, 11-12 versus Akron and 6-6 versus Pepperdine). Those 55 free throws made since Dec. 4 are more than all but just three players (Grant, Scott & Reggie Johnson) have taken all season. Grant has increased his free throw percentage from .756 as a redshirt sophomore last season to .905 this season — second-best in the ACC. Scott has improved tremendously from the line – after shooting just 67 percent as a freshman, he is up to 85.1 percent as a sophomore which ranks seventh in the ACC.

Over Miami’s last 10 games, the Hurricanes improved shooting from every area of the court — including a jump in three-point field goal percentage from 31.4 percent to 43.2 percent — and decreased the turnovers, resulting in a +11.8 scoring margin.

Over this 10-game span, the Hurricanes have three averaging double-figure scoring in Malcolm Grant (17.0 ppg), Durand Scott (14.1 ppg) and Reggie Johnson (12.0 ppg). Over this span, four players are hitting better than 40 percent of their three-point shots — led by Grant’s 2.6 three-pointers per game at 41.8 percent . Adrian Thomas adds 2.5 threes at 43.1 percent.

Individual game tickets for Miami’s ACC games are now on sale to the general public. The Hurricanes will host a regular slate of eight ACC games, welcoming the last two national champions to the BankUnited Center in top-ranked Duke on Sun., Feb. 13, and 2009 champs North Carolina on Wed., Jan. 26. Prices for most ACC games begin as low as $15. For additional information or to order season tickets, please contact the Hurricane Ticket Office online at www.hurricanesports.com or by phone at 1-800-GO-CANES.