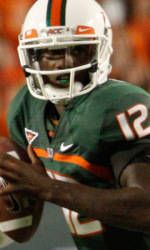 Harris played in nine games this season, starting the first eight before a concussion sidelined him for the better part of a month. On the year, he has completed 144-of-263 attempts for 1,756 yards with 14 touchdowns and 12 interceptions.

Harris ranks among the all-time greats at Miami statistically in his career. He currently ranks second in career touchdown passes at UM (50), behind Ken Dorey (86) and ahead of such names as Vinny Testaverde (48), Steve Walsh (48), Gino Torretta (47) and Craig Erickson (46). In his career, Harris has passed for 6,303 yards, 50 touchdowns and 36 interceptions in 35 games.

Morris will continue to be evaluated but is expected to be available for the game.

Miami will take on Notre Dame at 2 p.m. EST Friday at Sun Bowl Stadium. The game will be televised live on CBS.