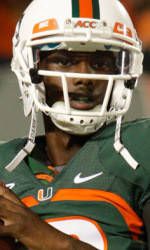 EL PASO, Texas – The University of Miami football team wrapped up its preparation for the Hyundai Sun Bowl on Thursday, holding a brief walk-through practice at Sun Bowl Stadium after attending the Sun Bowl luncheon in downtown El Paso.

Stoutland spoke on a number of topics, including the announcement that junior Jacory Harris will start at quarterback against the Fighting Irish.

Sun Bowl Luncheon
After the head coach’s press conference, the team headed to the El Paso Rotary Club’s Sun Bowl Team Luncheon at the El Paso Convention Center. Proceeds from the luncheon went towards various children’s programs in the area. Fans not lucky enough to get a seat were treated to UM’s Band of the Hour and cheerleaders pep rally outside.

“I had a chance to coach at Syracuse twice,” said University of Miami interim head coach Jeff Stoutland. “He was their quarterback – I believe it was 1986 – we were playing at West Virginia. You’re talking about the great all-time players that ever played college football and I was there to see it. I witnessed it.”

The offensive, defensive and special teams starters of both schools were introduced to the crowd by another Sun Bowl Legend, CBS sportscaster Verne Lundquist. One-by-one, the starters from each respective team came out shook hands and joined the fans for lunch.

Both Stoutland and Notre Dame coach Brian Kelly were presented with commemorative road signs of their names. This, however, marked the second street named after Stoutland in El Paso (http://bit.ly/gx9LEb).

Also at the luncheon, Brianna Commerford represented Hyundai’s Hope on Wheels as their National Youth Ambassador. Currently in remission after being diagnosed with stage four Hodgkin’s Lymphoma, she spoke to the crowd about her fight with cancer, determination in finding a cure and neutrality to both teams. Brianna will be a part of the coin toss in Friday’s game.

‘Canes Visit Sun Bowl Stadium
Despite a nasty conditions, the Hurricanes held a brief walkthrough practice at Sun Bowl Stadium, spending about a half hour on the field to finalize their preparation for Friday’s game. The team worked through cold, rainy conditions with wind picking up into the 30 mile-per-hour range throughout the session.

What’s Next?
The `Canes will rest up Thursday night before heading to Sun Bowl Stadium Friday morning. Miami and Notre Dame will kick-off at 2 p.m. EST on CBS.