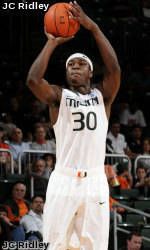 CORAL GABLES, FLA… The University of Miami men’s basketball team closes 2010 playing host to Pepperdine on Thurs., Dec. 30, at 6 p.m. in the BankUnited Center. The game opens a Hurricane doubleheader as the women’s team will take on Morgan State at 8 p.m. Doubleheader deal tickets are available for just $5 — which gives fans entry to both Miami basketball games.

Miami – who has won eight of its last nine games – is led by three players averaging double-figure points. Malcolm Grant is contributing a team-high 15.4 points per game — seventh-best in the ACC, and also ranks among the league’s leaders in free throw percentage (.897, 3rd), three-point field goal percentage (.443, 4th) and three-point field goals made (2.4, 6th). Durand Scott adds 13.4 points and a team-high 3.8 assists an outing, converting better than 46 percent from both the field and long range and shooting a much-improved 84.1 percent from the line (compared to 67.0 percent as a freshman in 2009-10). Reggie Johnson averages nearly a double-double with 12.1 points and 9.5 rebounds per game, while shooting 70.9 percent from the charity stripe.

CATCH THE GAME ONLINE Thursday’s game versus Pepperdine will not be televised, but will be available on radio at 560 WQAM (WQAM.com) and at 90.5 FM (WVUM.org). In addition, it will be streamed live online on `Canes All-Access. The service is $9.95 a month or $79.95 per year. Visit hurricanesports.com/allaccess/ to sign up.

TRAVEL TROUBLESWe want our backcourt back! The snow is affecting Miami too as starting guards Durand Scott and Malcolm Grant were still at their homes in New York on Wednesday afternoon following Sunday’s blizzard. The high-scoring duo — averaging a combined 28.8 points and 7.2 assists per game — were still trying to return to South Florida on Wednesday evening. Fellow starter Garrius Adams finally made it back to Miami on Tuesday — by car from North Carolina.

ACC PLAYER OF THE WEEKMalcolm Grant was selected ACC Player of the Week after leading the Hurricanes to a perfect 3-0 mark over three days in last week’s Las Vegas Holiday Hoops Classic. Earning the honor for the first time in his career, Grant averaged 19.0 points and 2.3 assists per game over the last week, while shooting 52 percent from the field (13-25), 50 percent from beyond the arc (6-12) and 92.6 from the line (25-27). He has hit 49 of his last 52 free throws (94.2 percent) since Dec. 4. SWEET CHARITYMiami’s starting backcourt of Durand Scott and Malcolm Grant has improved its accuracy from the line. Entering Thursday’s game versus Pepperdine, Grant has hit 49 of his last 52 free throws dating back to the Dec. 4 win over West Virginia, going 13-14 versus West Virginia, 5-5 versus Stetson, 6-6 versus UCF, 9-9 versus Oral Roberts, 5-6 versus Rice and 11-12 versus Akron). Those 52 free throw attempts since Dec. 4 are more than all but just three players (Grant, Scott & Reggie Johnson) have taken all season. Grant has increased his free throw percentage from .756 as a redshirt sophomore last season to .897 this season — third-best in the ACC. Scott has improved tremendously from the line – after shooting just 67 percent as a freshman, he is up to 84.1 percent as a sophomore which ranks seventh in the ACC.

THE SERIESMiami and Pepperdine have met just twice in program history, with the series tied at 1-all. The Hurricanes won the last meeting between the teams — an 86-63 decision in Malibu on Jan. 3, 2010. Former Hurricane James Dews led Miami with 21 points — including five three-pointers, while Adrian Thomas added 15 points on a career-high 5-of-6 three-point shooting. For the game, Miami shot 52.6 percent from the field and 44.8 percent from long range (13-29). Three Pepperdine players finished in double-figure scoring, led by Keion Bell’s game-high 22 points, including hitting 11-of-15 free throws. The victory gave UM a perfect 14-0 non-conference record in 2009-10. (Box score and detailed account on page 121 of the Miami men’s basketball media guide.) The Waves won the inaugural meeting between the schools in overtime on Dec. 13, 1969 (93-90 in Los Angeles).

NEXT UP FOR THE `CANES Following Thursday’s game versus Pepperdine, the Hurricanes hit the road to open their ACC schedule at top-ranked and defending national champions Duke on Sun., Jan. 2, at 7:45 p.m. on Fox Sports. Miami then continues its ACC schedule on the road at Clemson on Sat., Jan. 8 (6 p.m., ESPNU), before returning home to the BankUnited Center to play host to Boston College in its ACC home-opener on Sat., Jan. 15, at 6 p.m. in a game to be broadcast on ESPNU.