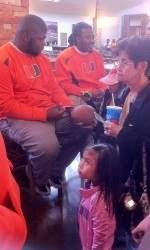 EL PASO, Texas – The University of Miami football team wrapped up its first full day in El Paso on Monday, practicing in the morning before visits to a local hospital, a nearby mall and a famous boot store in the afternoon.

Among the military personnel in attendance were Sergeant Miguel Leon, a native of Miami Lakes, and Lieutenant Colonel Dan O’Grady.

“It is great to see my hometown team here in El Paso,” Leon said. “Been in the military for 10 years and it is just finally good to have them out this way. I’m looking forward to see them represent South Florida in the Sun Bowl.”

O’Grady, a 1990 graduate and ROTC member at the University of Miami, has been serving since he finished school and is married to former UM swimmer Kathy Cruciger.

The `Canes practiced for just under two hours under relatively cool conditions.

The team took turns signing footballs, shirts, and even babies, as well as spending time chatting with the kids. Matt Bosher was particularly instrumental in rounding up the team and making sure each T-shirt had everyone’s signature.

“It’s great to see the kids smile and have fun and just kind of forget their worries and be a kid,” Tyler Horn said. “It’s a great feeling for us and I’m sure it’s a better feeling for them. We’re happy to be here and we’re having a great time. We love doing things like this.”

The team also visited one-on-one with patients in the pediatric intensive care unit. Pat Hill had to play in the dark with one particular toddler as the hospital lights hurt his eyes.

“He doesn’t like his nurses, but he likes the football players,” said Claudia Olivas, a nurse in the intensive care unit.

VIDEO: Clips From The Hospital Visit

Travis Benjamin, Jacory Harris, LaRon Byrd and others were among the student-athletes signing autographs for fans – young and old – inside the mall. In fact, while inside the mall’s food court area, a line developed that went right to the doors leading from the outdoor eating/play area. The Hurricanes took time for photos, as well as being filmed by a local community group documenting the experience for Fort Bliss crew that could not make it to the event.

Two members of the U.S. Army stationed at Fort Bliss – Master Sergeant Marshall Fife and Sergeant First Class Dwayne Gilroy – spoke about the importance of the `Canes playing in this year’s Sun Bowl, as well as the impact the Sun Bowl has on the town of El Paso each year.

“Having Miami here is huge for me because I’ve been a Miami fan since 1989,” Gilroy said. “I came here from Jamaica and I never had a chance to get to Miami to see Miami play. So, with them coming here where I’m stationed, they’re like rock stars to me. This is huge.”

“The Sun Bowl is great for this town,” said Fife. “It produces so much income to some of the local businesses, and it brightens the spirits of so many of the people in the community around here.”

The `Canes Go Country
The entire Miami football team and a portion of the travel staff visited the world famous Lucchese Boot Store in El Paso and came away with 12 pairs of boots and one cowboy hat.

Perhaps the most “country” of the Miami Hurricane players, Allen Bailey, abstained from the shopping spree. Bailey’s story and upbringing on a remote island in Georgia has been well chronicled, but he said he has never owned a pair of cowboy boots in his life.

As for Tallahassee native Ryan Hill (PHOTO), this was not his first pair, nor will it be his last. Hill is proud as he boasts about being an outdoorsman and deer hunter. He also was raving about the 32 acres of land his mother lives on in Georgia.

What’s Next?
On Tuesday, a press conference will be held at 8:30 a.m. MST with Miami interim head coach Jeff Stoutland and Notre Dame head coach Brian Kelly. Following that, the `Canes will hold their second practice at Burges High School at 10:15 a.m. The entire afternoon will be spent at Fort Bliss where the `Canes will get a tour of the facility and visit and have dinner with military personnel.