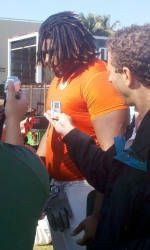 Interim head coach Jeff Stoutland and the current coaching staff continue to run the team’s practices, while Al Golden and assistants Mark D’Onofrio, Jethro Franklin and Paul Williams looked on from the sidelines.

Henderson Returns to Practice
The biggest news to come out of Monday’s practice was the return of Seantrel Henderson, who had been out of action recently with an illness. Henderson met with the media after practice and talked about among other things, Sunday’s announcement that Jeff Stoutland would be back next year as the Hurricanes’ offensive line coach.

“It’s the greatest news we’ve heard all week,” Henderson said. “Us as offensive linemen, we love coach Stoutland… just as much as he loves us, coming out and working with us every day. Putting the work in that he does, we all appreciate that. We are glad that coach Stoutland gets to stay.”

On his first year in Coral Gables…

Notre Dame Prep
While much of the focus in bowl practice has been about competition and staying energized, Monday’s practice had a little different tone with the Sun Bowl now just 11 days out.

“Today was strictly Notre Dame game plan,” Stoutland said. “At the end of the day, we culminated the practice with a competitive drill, offense against defense and the defense did really good. We were in the red zone and they did really well.”

Stoutland addressed the news after practice….

“First of all, I am blessed,” Stoutland said. “I feel blessed for coach Golden to ask me to stay on. There are just wonderful kids here and I love coaching these kids. I feel very blessed and very fortunate that he asked me.

“He has such natural skills. He has the size obviously, he has the ability to change directions, he can flat out run and he uses his hands very well. He was coached very well in high school.

“He is unique,” Stoutland added. “He is low maintenance. He doesn’t look for attention.”

One More to Go
Miami will hold one final practice on Greentree Tuesday morning before the team breaks for the holidays. The `Canes will depart for El Paso, Texas for the Hyundai Sun Bowl on Sunday, Dec. 26 with the team’s first practice in Texas slated for Dec. 27.