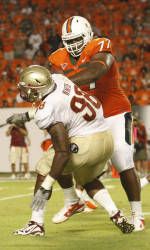 Miller, a 5-11, 210-pound running back, saw action in 10 games in the Hurricanes’ backfield, including a start against Maryland. Miller finished the regular season second on the `Canes squad in rushing yards with 633 (6.1 per game) and a team-leading six touchdowns on the ground. Miller has also caught nine catches out of the backfield for 64 yards.

Seantrel Henderson is a 6-8, 330-pound true freshman from St. Paul, Minn. Henderson started the last nine game of the regular season, playing in 11-of-12 overall. A stronghold at the tackle position along the Hurricanes’ offensive line, he was tabbed a third team selection on Phil Steele’s All-ACC Team. Henderson helped pave the way for Miami to rank atop the ACC in total offense (422.6 yards per game) and third in rushing offense (190.4 yards per game). In addition, Henderson was selected to the Sporting News Freshman All-American Team for offense. Last week, he was named Miami’s Newcomer of the Year at the annual UM football awards banquet.

Asante Cleveland, 6-5, 245-pounds, is another true freshman that saw action for the `Canes. He saw action at tight end in seven of the final eight games on the year, picking up a start against North Carolina. Cleveland pulled in seven catches for 95 yards (13.6 per catch) – with his best game coming in a start against the Tar Heels, where he reeled in two passes for 34 yards, and a long of 25, setting up a touchdown on the drive.

Brandon Linder, a 6-6, 300-pound true freshman out of St. Thomas Aquinas, saw action in 10 games for Miami, including five starts – suiting up as a starter in three of the last four contests. Linder combined with Henderson along the front line that paved the way for the `Canes to rank first in the league for total offense. He also helped protect quarterbacks Jacory Harris and Stephen Morris which led to UM ranking second in the league in sacks against. Miami finished the regular season with 19 touchdowns on the ground, adding another 19 through the air.

For more information on University of Miami football, please log on to HurricaneSports.com, or visit the official blog of the “U” football by visiting TheUFootball.com.

You can keep up-to-date with all UM Athletics via twitter at Twitter.com/HurricaneSports.  You can also become a fan of the `Canes on Facebook at Facebook.com/MiamiHurricanes.