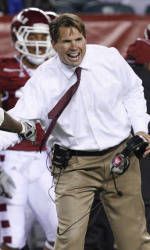 The Right Man at the Right Time

CORAL GABLES, Fla. – When the first two names on your list of references are Bill Parcells and Joe Paterno, you are probably good at what you do. Al Golden might rub elbows with some of the most iconic figures in football, but his track record as one of the best young coaches in the sport speaks for itself.

Hired by Temple University in 2005 to save a listless program on the brink of extinction, Golden was walking into a position destined for failure.

Only problem was, someone forgot to tell Golden.

Five years later, the Owls had been transformed from a team without hope to one with annual conference championship and bowl aspirations. In less than a half a decade with the 41-year-old New Jersey native at the helm, Temple went from a program that consistently lost double-digit games to one that has won 17 of its last 23 contests.

“What he has done at Temple University is short of miraculous,” University of Miami Director of Athletics Kirby Hocutt said. “He has taken a football program that was at the bottom point of the college football world and has built them to a respectable program. He is going to do great things here at the University of Miami.”

It wasn’t enough for Golden to change a losing culture on the field, he cleaned up a struggling program in the classroom, boosting Academic Progress Report and Graduation Success Rate scores in his time in Philadelphia.

Golden’s impact on Temple’s program was nothing short of remarkable, and when it came time for Hocutt to find a new leader for Miami, he had one man in mind.

“I couldn’t be more excited to have him come lead this proud football program,” Hocutt said. “There is nobody with more energy, excitement or enthusiasm in this country than Coach Golden.

“He is an excellent communicator, he is very organized, detail-oriented and he is inspirational,” Hocutt added. “He will inspire this football program to greatness,” Hocutt said.

Hocutt, like so many in college football circles, has been more than impressed with what Golden has been able to do in his young career from his years as defensive coordinator at Virginia to his time as the head man at Temple.

“He has learned, he has grown and he has developed,” Hocutt said.” He is ready for that next step. He is ready to come to a program that can compete and win national championships.”

Golden is inheriting a situation far better than that of his previous stop. That much is evident. With a roster full of budding stars like Seantrel Henderson, Lamar Miller and Stephen Morris, the future is sooner rather than later this time around for Golden.

“We are looking forward to having him here and taking the next step forward and continuing our journey here at the University of Miami to get to the top.”

That next step starts on Monday when Golden will meet with players, media and fans in what will be the official beginning of a new, different era of Miami football.

Temple had that same type of day five years ago. It has since become something it had never been before – relevant.

It’s time for Miami to become what it used to be.