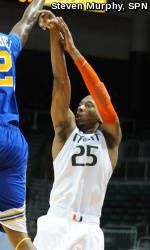 CORAL GABLES, FLA. – The University of Miami men’s basketball team returns to the BankUnited Center to open a three-game homestand versus Ole Miss of the SEC on Tues., Nov. 30, at 7 p.m. The game will be televised by Fox Sports Florida (FS-FL) and the New England Sports Network (NESN), and is available by radio on 560 WQAM (WQAM.com) and on 90.5 FM (WVUM.org).

Miami, winners of two straight, has won 16 consecutive non-conference regular season games at home and is 3-0 at the BankUnited Center this season. Over the last four seasons, the Hurricanes have compiled a 41-10 (.804) record at home and are 71-27 (.724) at home in their seventh season under head coach Frank Haith — including nine wins over ranked opponents.

Under Haith, the Hurricanes are 4-4 versus SEC teams and have won three of their last four games versus the SEC – including an 85-70 win over South Carolina on Nov. 22, 2009 to claim the Charleston Classic.

Miami is 2-0 all-time versus Ole Miss, with both previous meetings occurring in 1949.

CHAT WITH FELLOW `CANESLog onto HurricaneSports.com during Miami athletic events to chat with Miami insiders and other fans about the game and your favorite student-athletes. To join the chat, click on the Cover It Live program found online with each game’s preview, beginning 30 minutes before tip-off.

NEXT UP FOR THE `CANESFollowing Tuesday’s contest versus Ole Miss, Miami remains at home for another two games — playing host to 2010 Final Four participant West Virginia on Sat., Dec. 4, at 4 p.m. and Stetson on Sun., Dec. 12, at 4 p.m.

SCOUTING THE REBELSOle Miss brings a 3-1 record to its first road game of the season. The Rebels come off Friday’s 84-71 win over Penn State, led by Trevor Gaskins’ career-high 24 points and 20 points from senior point guard Chris Warren — the SEC’s active scoring leader with 1,439 career points. Ole Miss is 56-14 versus non-conference opponents under fifth-year head coach Andy Kennedy and is 17-24 all-time versus current members of the ACC, last defeating Virginia Tech, 81-72, in the quarterfinals of the 2008 NIT. The Rebels advanced to the NIT quarterfinals in 2010, falling to eventual champion Dayton, 68-63. Dayton is also the only team to have defeated Ole Miss so far this season, downing the Rebels in overtime, 78-71, on Nov. 20.

HURRICANE WARNINGSeventh-year head coach Frank Haith and the Hurricanes have defeated 25 of its last 27 non-conference opponents during the regular season. In addition, the `Canes have won 16-straight regular-season non-conference matches at home, last falling to Ohio State, 73-68, in the ACC/Big Ten Challenge on Dec. 2, 2008.

ON THE DOUBLEAfter posting the first double-double of his young career at then- No. 19 Memphis, sophomore center Reggie Johnson has notched four double-doubles over the last five games — just one rebound shy of making that five straight. His four double-doubles this season ties with FSU’s Chris Singleton as the second most recorded by an ACC player this season.

Averaging 12.0 points and 10.5 rebounds per game, Johnson is among four ACC players averaging a double-double.

TICKET INFORMATIONSecure your tickets to see the Hurricanes take on top-ranked Duke on Feb. 12 by purchasing the ACC 4-Pack. For additional information or to order season tickets, please contact the Hurricane Ticket Office online at www.hurricanesports.com or by phone at 1-800-GO-CANES.