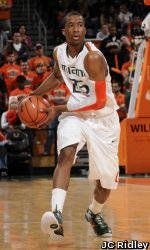 FORT MYERS, FLA. – The University of Miami men’s basketball team returns to the road for the third time in six games this season, crossing the state to take on Florida Gulf Coast on Sat., Nov. 27, at 7:05 p.m.

It marks the fourth game over the last eight days for the Hurricanes — including their second road game of the week.

Saturday is the second meeting between Miami and Florida Gulf Coast, with the Hurricanes winning the inaugural contest, 77-58, almost exactly one year ago on Nov. 25, 2009, in Coral Gables. In that game, DeQuan Jones hit 6-of-8 from the field en route to a career-high 16 points to lead three `Canes in double figures. James Dews hit 5-of-6 three-pointers to finish with 15 points, while Malcolm Grant hit a career-high tying four treys and had 14 points and four assists in the win. Miami scored the first eight points of the game, grabbed seven first-half steals and would lead by as many as 18 points before taking the 39-23 lead into the break. Back-to-back baskets extended UM’s lead to 20 points just 47 seconds into the second half, and the Hurricanes would lead by as many as 26 points in the win.

NEXT UP FOR THE `CANES
Following Saturday’s contest at Florida Gulf Coast, Miami returns home to the BankUnited Center to play host to three-straight opponents — Ole Miss, West Virginia (a 2010 Final Four participant) and Stetson.

HELLO, MY NAME IS RION
Freshman guard Rion Brown posted his second double-figure scoring performance of his young collegiate career, coming off the bench versus McNeese State to score a team-high 16 points, converting 5-of-7 from the field, a career-best 4-of-6 from long range and 2-of-2 from the line, while grabbing a season-high four rebounds and a pair of steals.

Brown scored a career-high 17 points off the bench in the Nov. 19 win over North Carolina Central. The true freshman, whose previous high of three points came against Jacksonville in the season-opener, finished the game shooting 5-of-9 from the field, 2-of-5 from behind the arc and 5-of-6 from the line. Those 17 points tie him with Duke’s Seth Curry and Wake Forest’s Gary Clark for the fourth-highest scoring total by an ACC player of the bench this season.

Brown is the only Hurricane to lead the team in scoring twice this season.

KEEP IT GOING
Junior guard Malcolm Grant went 2-of-5 from beyond the arc in Wednesday’s win over McNeese State and has hit a three-pointer in 12 straight games — the second-longest active streak in the ACC, behind Florida State’s Deividas Dulkys, who has hit a three in 14 straight games.

JUST WIN
Seventh-year head coach Frank Haith and the Hurricanes have defeated 24 of its last 26 non-conference opponents during the regular season. Miami had won 22-straight until the72-68 loss at then-No. 19 Memphis (currently No. 14 in the AP Poll and No. 15 in the Coaches Poll), in a game that tipped at midnight to kick start ESPN’s hoops marathon.

SUNSHINE STATE SERIES
The Hurricanes are 324-155 (.676) all-time versus in-state opponents, including a 26-10 (.722) mark under Frank Haith. Miami has won 57 of its last 71 games versus Florida schools, dating back to the 1992-93 season. During the 2010-11 regular season, the Hurricanes are slated to face five in-state opponents six times — Jacksonville, Florida Gulf Coast, Stetson, UCF and Florida State twice.

CHAT WITH FELLOW `CANES
Log onto HurricaneSports.com during Miami athletic events to chat with Miami insiders and other fans about the game and your favorite student-athletes. To join the chat, click on the Cover It Live program found below beginning 30 minutes before tip-off.

TICKET INFORMATION
To order tickets for the Hurricanes’ 2010-11 season, visit HurricaneSports.com or call the Hurricane ticket office at 1-800-GO-CANES. Season tickets start as low as $99.