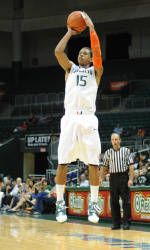 Brown, who shot 4 of 6 from 3-point range, was one of six Hurricanes to finish in double figures as Miami (3-2) rebounded from its second loss of the season Sunday at Rutgers.

The Hurricanes extended a 12-point halftime lead to 54-32 on two 3-pointers by Malcolm Grant and one apiece from Durand Scott and Garrius Adams during the first 3:14 of the second half.

Scott and Reggie Johnson scored 12 points each, while Adams added 11 and DeQuan Jones and Grant had 10 apiece. Grant also finished with nine assists.

Brown’s third 3-pointer of the first half increased the Hurricanes’ lead to 32-24 with 4:02 remaining. Johnson scored two baskets in an 8-0 spurt, which gave Miami its biggest advantage of the first half, 40-27, en route to a 42-30 lead at the break.

The Cowboys ran off to a 7-0 lead in the first 2:40 behind Patrick Richard’s two field goals and Kapelan’s 3-pointer.

Richard and Kapelan scored 21 of the Cowboys’ 30 first-half points, but Richard was held scoreless in the second half and finished with 13 points.