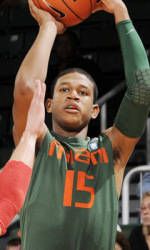 The Hurricanes (2-1), who rebounded from their first loss of the season against Memphis on Monday, never trailed and broke the game open with 12 unanswered points early in the second half.

Brown, Garrius Adams and Adrian Thomas each hit 3-pointers during the run and Raphael Akpejiori’s three-point play with 12:43 remaining capped the run for a 64-39 Miami lead.

Brown picked up the scoring load for the Hurricanes’ leading scorers, guards Malcolm Grant and Durand Scott, who were averaging 20 points per game. Grant had eight points and Scott scored three.

Reggie Johnson had a double-double of 12 points and 10 rebounds for the Hurricanes.

The Hurricanes took their first double-digit lead on Johnson’s three-point play with 4:49 left for a 35-23 advantage.

Although the Eagles stayed within range after Landon Clement’s 3-pointer with 2:09 left cut the Miami lead to 38-31, the Hurricanes closed the first half with five unanswered points.

Miami defeated North Carolina Central for the third consecutive time after the teams began their series in 2008-09.