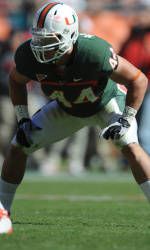 Assignment Football is Name of the Game in Atlanta

CORAL GABLES, Fla. – At this point, everyone knows what you are going to get when you play Georgia Tech. The problem is, it’s not always easy to stop what you know is coming.

Paul Johnson’s offense is as effective as it is unique. The Yellow Jackets lead the country in rushing, averaging 320.56 yards per game on the ground. Everyone knows they are going to run the ball, yet few have been able to stop it.

Johnson’s spread option offense, which keeps opposing defenses on their toes with a variety of talent and options in the backfield, is a throwback to old time football. At any point, as many as three or even four players could get the ball in the backfield on any given play.

That pitch is going to be coming from a new face this weekend, as Georgia Tech’s All-ACC quarterback Josh Nesbitt is out with an injury. That’s not to say a whole lot will change for the Yellow Jackets’ offense with the inexperienced Tevin Washington behind center.

“We might change it a little bit,” Johnson said. “We will see how the game goes. It depends. It is an ebb and flow type deal. He was our starting quarterback this spring and my thought process on that is to let him see what he can do.

“It is like I told him, you don’t have to win the game, just do your job and manage the game,” Johnson added. “We are not the kind of football team that relies solely on the quarterback. I think you have to play and we have confidence in doing what we need to do to win the game.”

Shannon and John Lovett know the difficulties of facing Georgia Tech, regardless of who is at quarterback. Two seasons ago in Atlanta, the Yellow Jackets carved up the Miami defense for 472 yards rushing on 56 carries. Last year in Miami – Lovett’s first as defensive coordinator – the `Canes appeared to have fixed everything they had done wrong the year prior, holding Georgia Tech to just 95 yards on 39 carries.

The truth probably lies somewhere in the middle, but ultimately it is going to come down to how the `Canes respond to what they see early on Saturday.

Defending the option is obviously a complicated process, but the bottom line is all 11 on defense have a job that they can’t stray from. One of the most important spots on the defense will be at the defensive tackle positions, where Miami is expected to get run-stopper Josh Holmes back from injury. Holmes, along with Micanor Regis, Marcus Forston and Luther Robinson, will play a crucial role in breaking up the Yellow Jackets’ blocking schemes.

“It’s assignment football,” Forston said. “We’re going back to the basics, just like it ought to be. Every man has a job. Don’t try to do anybody else’s job but you’re own. If we do that every play, we are going to be alright.”