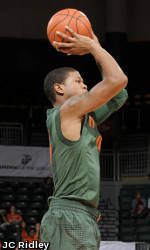 Monday’s exhibition game versus the Mocs, ranked No. 6 in the National Association of Basketball Coaches (NABC) preseason Division II poll, will serve as the final preseason tune up for the Hurricanes before they open regular-season play versus Jacksonville at home at the BankUnited Center on Fri., Nov. 12, at 7:30 p.m.

Miami returns to the hardwood following Wednesday’s 102-33 rout of Barry in which five Hurricanes scored in doubles figures, led by 16 points apiece from junior DeQuan Jones and true freshman Rion Brown. The duo nearly outscored the Bucs. Sophomore Durand Scott, an ACC All-Rookie Team pick in 2009-10, added a team-high five assists, while junior Malcolm Grant contributed 15 points, converting 5-of-7 from beyond the arc. Redshirt freshman Donnavan Kirk added a double-double of 11 points and a team-high 10 rebounds. Non-starters accounted for 60 of Miami’s 102 points.

BACK FOR THE `CANES

The Hurricanes – who went 20-13 last season and advanced to the ACC Tournament semifinals before falling to eventual national champion Duke, 77-74 – return four starters from 2010, including ACC All-Rookie Team and All-Tournament First Team pick Durand Scott and ACC All-Tournament Second Team selection Reggie Johnson, in addition to the ACC’s most accurate three-point shooter in Adrian Thomas. Over his final nine games as a true freshman last season, Scott averaged 16.3 points per game, while converting 52.6 percent from the field and 81.5 percent from the line. Johnson added 15.5 points and 6.8 rebounds per game, while shooting 63 percent from the field over his last four games as a redshirt freshman. Thomas has hit a three in 11-straight games heading into this season – the longest active streak in the ACC.

A LOOK AT THE MOCS

BOWLING WITH THE HURRICANES

Join seventh-year head coach Frank Haith and the Hurricanes men’s basketball team at the third annual University of Miami Men’s BasketBowl on Tues., Nov. 9, from 6:30-9:30 p.m. at Splitsville Lanes in Sunset Place. Guests will have the opportunity to meet and mingle with the team and coaching staff and participate in an auction for exclusive prizes, including a VIP game experience. For additional information or to register for the University of Miami Men’s BasketBowl, please contact the Hurricane Club at (305) 284-6699.

The Hurricanes open the regular season versus Jacksonville on Fri., Nov. 12, at 7:30 p.m. The Dolphins also went 20-13 in 2010 and won their second-straight Atlantic Sun regular-season title, advancing to the NIT’s second round after crossing the country to knock off Arizona State. Jacksonville returns three starters from last year’s squad, including senior Ayron Hardy who averaged 9.0 points, 5.6 rebounds and nearly one block per game.

For ticket information, please contact the Hurricane Ticket Office online at www.hurricanesports.com or by phone at 1-800-GO-CANES.