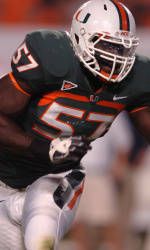 CORAL GABLES, Fla. – It has probably been about a decade since the University of Miami football team boasted this many All-America candidates. With the season now in its second half, it’s apparent there are more than just a few deserving `Canes for not only ACC honors, but national recognition.

And don’t forget about big Seantrel Henderson, who looks to be on his way to freshman All-America honors.

Then there is rising stars Micanor Regis and Ray-Ray Armstrong, who appear to be coming into their own over the last month.

When No. 22 Miami (5-2, 3-1 ACC) takes the field Saturday at Virginia (3-4, 0-3 ACC), college football fans everywhere will get another look at the `Canes on national television with the game slated for a noon kick on ESPN.

When asked earlier this week about what concerns him the most about Miami, Virginia’s first-year head coach Mike London responded sarcastically, “Let’s see, where can I start on that one?”

There are plenty of places to start but the obvious place is Hankerson, who has established himself as one of top receivers and NFL prospects in college football this season. Hankerson has been the ACC’s most consistent and productive receiver with eight touchdowns, 38 receptions and 591 yards through seven games. His reception-to-touchdown ratio of 1-to-4.75 ranks him seventh among the NCAA leaders in touchdown receptions.

So many other seniors alongside Hankerson have come into their own this year. Berry ranks second in the ACC in rushing; Bailey is getting to the quarterback with regularity now, despite double and triple teams on most plays; and Orlando Franklin has graded out at 96 percent and allowed just one sack in 490 snaps this year.

Each and every one them plays an important role to the Hurricanes’ success.

And while records and accolades will come in time for so many of these guys, it’s the team’s ultimate goal of winning the ACC and reaching the BCS that has them motivated. There’s no doubt you’ll see that on the field Saturday in Charlottesville.